Last week in Hyderabad, I had this royal Mughlai Breakfast at a modest eatery. This one may not be for the faint hearted but if one can manage portions, without getting swayed away, then it is a feast. Literally, it was a feast for me and my local colleague, Akshay Karan. Here is an account of our experience. 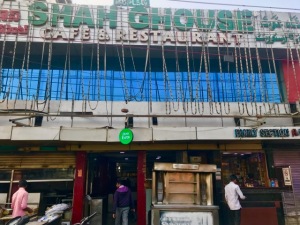 As decided the previous night, Akshay reached my hotel by 730 in the morning and we headed to Shah Ghouse at Toli Chowk. Even at these earthy hours, the place was damn full with locals having their early morning grub. We settled at a corner table and rattled out our order. To our surprise, it started landing on our table in no time for these are their specialities which are quite popular. 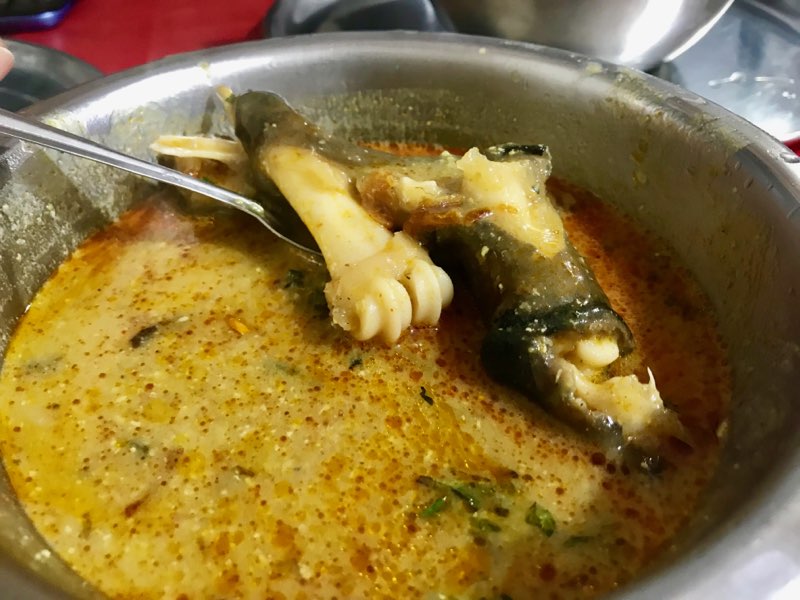 First came in the Nihari bowls. A huge bowl of Paya Nihari and another one a Zubaan Nihari. The bowl was full of Shorba with a meat piece peeping out. I had written about their Nihari earlier here (one can click this link for details). Needless 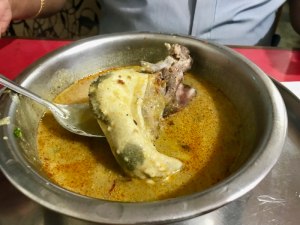 to say, the aroma and the flavours of this Nihari are typically Mughlai albeit with much less of oil floating on the surface as in Nihari, usually. While I had Paya Nihari earlier, I had to try out the Zubaan Nihari from the Akshay’s plate. A piece of the meat in the mouth told me the skin was soft and silky. The meat inside was akin to the goat lever but more moist and tasty. Overall, the Nihari here is different, flavourful and full of aromas. 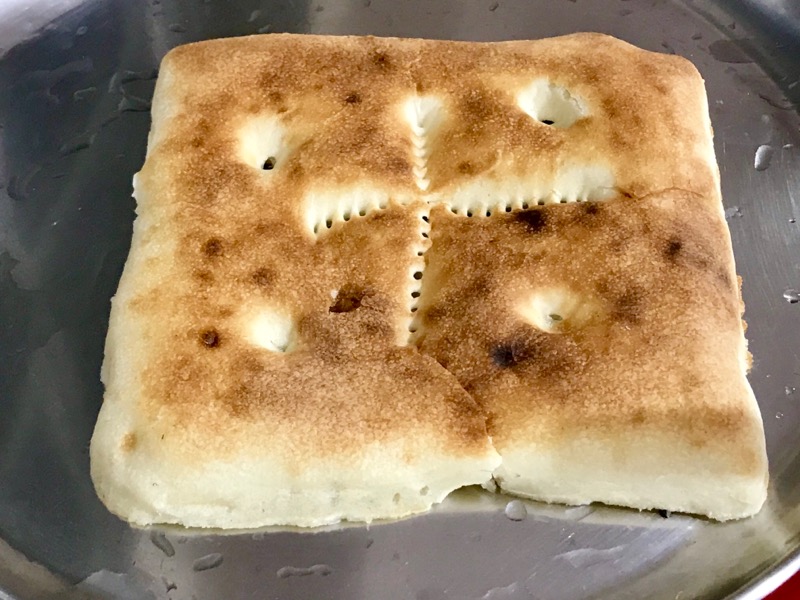 To go with the Nihari, we ordered their speciality Char Koni Naan; a fluffy square bread with hues of brown crust. Its soft, bouncy and fresh. Goes hell best with the shorba and the meat of the dish. A huge sized Tandoori Roti was also ordered as the next dish was about to arrive. 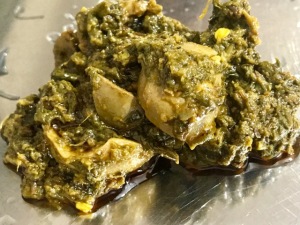 Next in the line was Gurda Bhaji; a dish of Kidneys made with Spinach. A reasonably good portion which was full of Kidneys peeping out of the dry curry of spinach. This greenish dish had all the flavourful aroma coming out. The Gurda was meaty soft and the sharpness of the spinach gave it a different flavour and texture. Again, this was a hit with the Roti and the special Naan.

Next arrived the famous Khichri with Mutton Keema, a curry called Khatta and Tamatar Ka Salan (a local tomato curry). Practically, a dish having 4 items to go along. 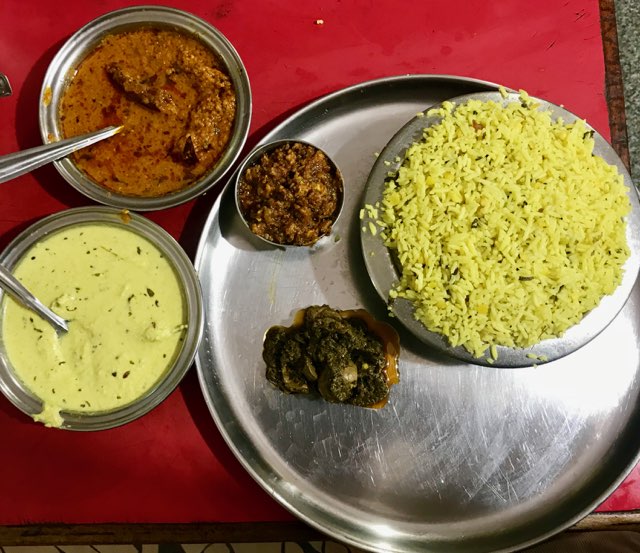 Khichri was a heap of goldenish rice sitting in a bowl. A closer look reveals that it had lentils; Masoor Dal too on it. It gave out the aroma of fresh rice with mild spices. The rice were not very dry and resembled biryani kind of looks. I served myself a small portion of Khichri and Keema. The dry rice and lentil combo when mixed with Keema gives you a burst of flavours and myriad textures on the palate. The Keema on its own is granular having balanced Mughlai flavours of both meat and the spices. 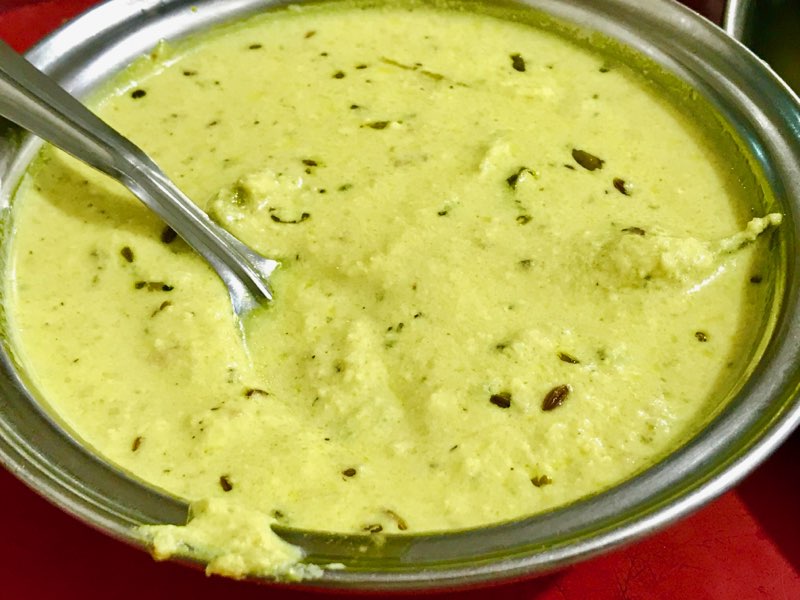 Next, I tried the Khatta. This is a master piece of a dish. This tangy smooth sauce is full of nutty, sharp sour and sweet flavours. I am told this is made with sesame and peanuts with a tang of tamarind, green chillies and some spices. I could have it even on its own. When mixed with Khichri, it takes the flavours to the next level. OMG, this was quite interesting and amusing. This taste is unique.  Next was to try it with Tamatar Ka Salan. Frankly, on its own, the Salan was quite tangy and sharp. However, I didn’t relish it with the Khichri. I think, it can be avoided. 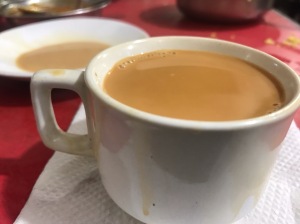 This hearty brekafast was wrapped with a cup of traditional Irani Chai (tea) in a rusty cup and saucer. This boiled cutting Chai was a bit high on sweetness yet it’s body gave you that satisfaction and the flavour

The meal was so tasty that the two of us ate to our heart content and yet could finish only half of the portion of the dishes. For this hugely satisfying and variety of breakfast we shelled out only INR 320. Which means, this food was enough for three if not four and the only addition would have been INR 10 for the additional cup of tea.

Oh !! What an experience of a flavourful meal. If you have any such eatery in your town where one has a similar great experience.

4 comments on “A Royal Breakfast In Hyderabad”