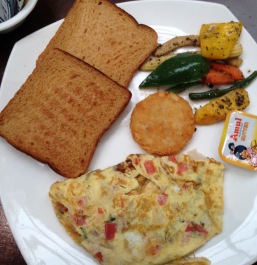 (frm L-R ) The Solace in Sunny Side, The Five Star version, The Homemade one and @ the Airport

Recently, I had to catch an early morning flight from Delhi.  Normally, after reaching the airport I have about 45 minutes in hand and an early morning black coffee or espresso does the job for me.  This time, don’t know why, I was particularly feeling very hungry.  So settled at Cafe Delhi Heights.  Amazingly, I was in for a pleasant surprise.  It actually made my day. Now what was that ? We will talk about it.  But first let’s talk about our likings for a particular taste.

There are vegetarians (meaning non-meatarians) and there are Non-Vegetarians. Then there are people who take pride in calling themselves Eggetarians. Meaning, they don’t eat meat but are fine with eating eggs. In fact they love eggs.

Now, world over there are boiled eggs, poached eggs, fried eggs, sunny side up eggs, scrambled eggs, egg bhurji, egg akuri, omelettes etc etc and the list can go on and on. And why go around the world? Let’s take the case of eggs in India. In our own country itself we come across eggs in numerous forms. We find eggs in restaurants, in five stars and most of the creative recipes are found on the street. Search Omelettes or Egg on youtube and it throws hundreds of clippings of famous eggwallas and there amazing dishes across various states of India.

Well, let’s keep this research-gyan on Eggs aside for a while (the lines above are enough to provoke your thoughts on egg) and let’s focus on just one variation, commonly known as Omelette !!

For most of the Eggetarians (non-vegetarians included), the breakfast is incomplete without eggs. And majority of the times, it is omelette.  Sometimes, as part of snack in the evenings (when you don’t feel like having Maggie) one falls back upon that humble Omelette.  If you are alone at home and don’t want to cook, Omelette is your best bet.

Now what’s Omelette ? In academic terms, it is a dish made from beaten eggs,  shallow fried with butter, and sometimes oil, in a frying pan.  Sometimes, you add veggies or cheese or meat in it while frying and fold it.  To get a fluffy omelette, many people add a very little amount of milk or water (not more than a tablespoon or even less) while beating the eggs.

Now let’s hold it here for a while and think of Chinese Noodles – our very own favourite Chowmein.  You get it everywhere.  In hotels, restaurants, roadside stalls or food carts; known as food vans.  Most of India loves it Chowmein from the roadside because it blends Indian flavours with right amount of frying.  Only a niche class would hate (or at least pretends so) that Chinjabi Noodles or Sino-Ludhianvi noodles and would search for authentic Chinese cuisine.  But most of us would love those roadside ones.  Ever thought why?

Here is why I suggested to hold on the omelette part for a while.  Now think, we eat omelettes at Home, sometimes from roadside famous eggwallas and in Hotels.  For me omelette has never worked out in Hotels (even five stars).  I love the Omelette made at home.  So, way back I stopped eating omelettes in hotels and instead settled for Sunny Side Up half fried ones. I keep on experimenting by ordering omelettes in different hotels in breakfast during my stay but always feel disappointed. Reason ?

The omelettes we eat homes are filled with onions, green chillies, tomatoes, salt and pepper.  At hotels also they use the same things albeit; most of the times without salt and pepper. They call it Masala Omelette.  Even when you order ‘Omelette’, the server would reconfirmed from you-‘Masala Omelette‘? You are supposed to add salt etc once the omelette is served on your table because it’s not added while beating or cooking. Literally, there is no masala in it except the veggies and coriander leaves.  Is salt and pepper the only difference that makes it different from the homemade version? No !!

When we make an omelette at home, we as per our Indian taste, cook it well on both sides till it is reasonably brown.  Also a reasonable amount of oil or butter is used so that it is well glazed and juicy when served hot.  In hotels, despite my regular advice of a well done omelette, there never comes brown colour in sight.  At the most, sometimes it has a hint of it. It’s folded and sometimes rolled by the live counter chefs during breakfast time.  While the outer side would seem cooked the inner would be surely half cooked.  I could never eat that half cooked stuff and on top of it a saltless omelette.  Then I tried another trick.  Starting advising them that not to fold my omelette and keep it flat.  The result was a little brown omelette.  Requests for well done omelette never met my expectations.  So started ordering Sunny Side Up in hotels and never missed an opportunity to have omelette at home in my or rather our way.  A chef friend told me that they are trained, world over, not to over cook the protein. That’s the reason most of them are scared to make it brown lest it could give a bad taste.

Now, coming back to the Cafe Delhi Heights at the airport. The surprise was the omelette which landed on my table (as I saw many eating omelettes there so dared to order it).  Firstly, the omelette was half folded and not rolled. It great looking and was shining, had that sprinkle of brown colour all over and tasted exactly like home with salt and pepper already added while preparing. It was a delight to eat it with sautéed veggies and hash brown petty and toast.  And mind it, the place is no roadside kiosk.  It’s right in the middle of waiting lounge post security, premium space.  And I found many were eating omelettes and the chefs were busy making many more. Those who were there, mostly appeared to be business travellers who would be eating their breakfasts in hotels the next morning.  Would they be ordering omelettes next morning ? I was not sure.  But I wasn’t going to order, I was sure. I enjoyed every bit of it.  Was closer to the homemade version and was surely delicious.  Was wondering how come they could get it right while many five stars shy away?

See, don’t I always say, every food has a story.

2 comments on “The Sunny Side of Omelettes”