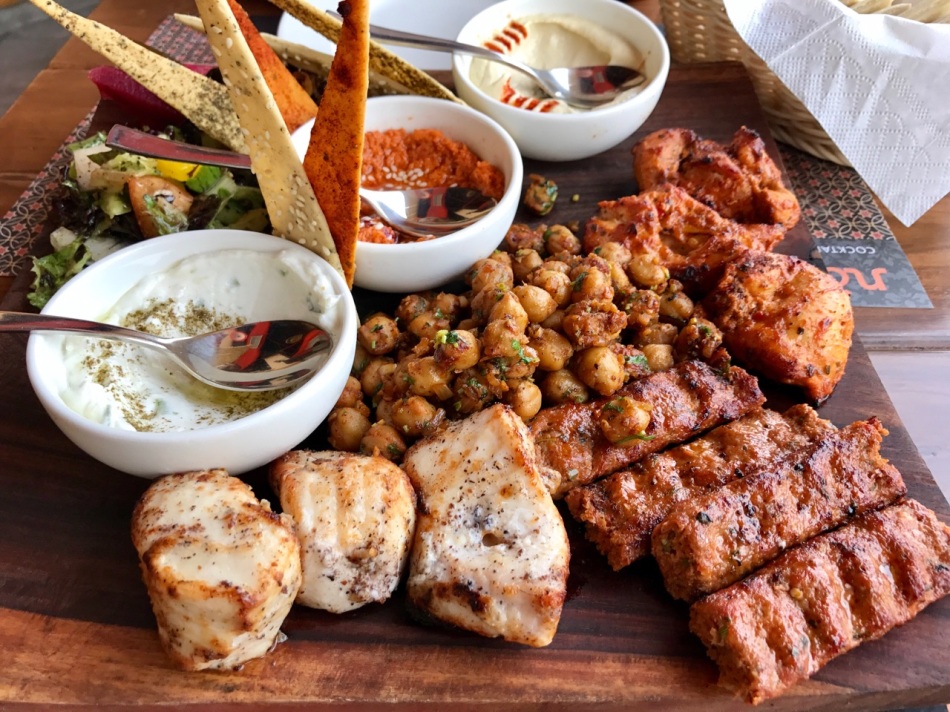 It rarely happens that in a short gap you visit two different restaurants , serving two entirely different cuisines and are class apart. Quite possible. The twist comes in that when one is an up market modern cafe with a unique name and great interiors, you obviously expect great food; and you are right in your expectation. Then, there is another restaurant which doesn’t raise your expectations neither with its name and nor it claims to offer you a specialised cuisine and yet it floors you. Confused ? I will solve this flavourful riddle for you, in the ensuing paragraphs.

So, a few days ago, my permanent accomplice in crime Chef Sanjay Pawar turns up exactly at the lunch time with a sparkle in his eyes and in no time he was driving me to a nearby, relatively new, cafe in Gurgaon called Norenj. The place is quite spacious and modern with tastefully done interiors, wooden furniture and wall decor with lot of natural light coming in. The menu said that it’s offerings were inspired by the culinary nexus between India and Afghanistan. This raised our expectations and the appetite too. Couldn’t resist the list of delicacies being offered on the menu, so quickly ordered a Non Veg Mezze Platter (will explain the contents- let it come), Mutton Harissa and Zafrrani Chicken Biryani.  Next few minutes seemed that they were the longest but we were hopeful that the wait would be worth it.

After some time, came in a big wooden plank and on it rested , God Knows, how many beautiful savouries. It was a love at first sight. On that squarish plank we got three pieces each of Shish Taouk (a chicken kebab from Middle East) , Samak Meshwi (Sole fish cooked in Iranian yoghurt marinade) and Adana Kebab (a lamb Kebab with roasted pepper paste and spices). Hold on, I am yet not finished. These beauties were accompanied by three dips – my favourite Hummus, Tzatziki and Muhammra and and it’s still not over. There were some fritters and baked chicpeas and lavash. Sitting in three bowls were the dips – Hummus, a slightly pale coloured dip made primarily with Chicpea paste and flavoured with garlic, pepper and olive oil. Tzatziki, a white coloured dill (a herb from the celery family) flavoured yoghurt dip and Muhammra, a bright red coloured dip made with hot pepper, pomegranate

and walnuts. By the way, it’s yet not over. All this comes with a basket of Pita Bread, a soft and fluffy off-white pieces of tempting carbs. I found the Pita here to be the best.

My my ! It was so very attractive and huge that it was becoming difficult to capture all the ingredients of the platter in one frame while sitting and trying to click. Whichever angle you choose, you were bound to miss something. Couldn’t afford to wait further.

So, first thing first. A quick transfer of fish on to your plate and  the first stroke of knife told you; handle with care. Was so soft and the first bite was like melt in mouth and very flavourful. It had the aroma and the flavour of the sea, mild spices and buttery. Next came the Chicken Kebab which again was very juicy and mildly flavoured. The meat was tender and unlike our chicken tikka, it was tender from both outside and inside. The marinade was very mild which gives you delicate flavours. A North Indian would have to acquire the taste to enjoy it. I loved it. The Lamb Kebab was again soft, granular meat and relatively a bit more prominent spices in it. Eating each Kebab with a galaxy of dips took you to the level of ecstasy of flavours. The accompanying condiments like veggies and chicpeas were also to be tried and they were great too; albeit one would not need them, frankly. I surely didn’t.

Next came the Mutton Harissa. A fiery red coloured dish which resembled the Lal 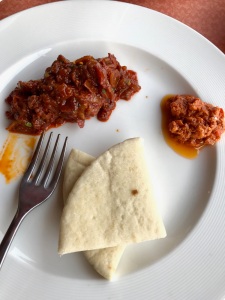 Maas of Rajasthan, albeit not with gravy but with a thick masala types coating on it. Harissa is basically Arabic made with 3-4 different kinds of roasted red peppers, hot chili peppers, spices and herbs such as garlicpaste, coriander seed, saffron, rose, or caraway, as well as some vegetable or olive oil for preservation. I expected it to be hot and pungent but was in for a pleasant surprise. The meat was tender and juicy. Was coming off the bone easily as I was able to take out the meat with just my fork without the help of a knife most of the time. It was a bit tangy and the thick masala like gravy had a body. Had looks of curry and with a unique taste. Went quite well with the soft Pita. I also tried it with all the dips and the combos were good too. And a colourful mutton along with red dip and Pita sitting in a white plate made a good view too for capturing on the camera.

By this time, I was almost done. Although I mind my portions and avoid carbs to quite an extent, I was conscious of the fact that Zaffran Biryani was yet to come. And yes, it came and announced its arrival through the aroma that came to me even before it could land on the table.

Wow!! What a sight it was. Golden yellow and Saffron coloured rice and each grain was sitting distinctly separate and yet close to each other. Was topped up with cashewnuts, fried onion slices, green chilli, fresh mint and coriander leaves. Chicken pieces seemed to be playing hide and seek amidst the rice. Couldn’t wait further, though not hungry anymore, so helped myself to just a few spoonfuls on to my plate. The Biryani  was a bit dry for me as I like more moist one, but was quite flavourful with mild spices. I was in for a pleasant surprise as each spoonful had a lemony aftertaste. Sanjay told me that at times chefs use a sprinkling of lemon juice with water just before finishing the dish. The meat too was flavourful and it made a good eat. Somehow, the flavour and fragrance of saffron was not very visible. However, not a bad dish at all. One can have it a couple of times.

Overall, a great experience, nice ambience, great food, good portions and reasonable prices. Will go back there at least couple of times more to taste other offerings.

Now, let me connect the whole string to another experience just a few days later.

It was my birthday and a Tuesday and we were compulsorily vegetarians that day and, compulsorily, had to go out for dinner. Net search got us interested in a slightly different sounding name Band Baaja Baaraat, in Rajouri Garden, west Delhi, serving veg and non-veg buffet. The user ratings said 4.5 out of 5. Got impressed and quickly drove to it.

To our surprise, in tune with its name,  it is a marriage theme based restaurant. The

decor inside resembles a North Indian wedding setting. At the entrance, you have a flower laden swing type seat for you to sit and click pics like one does with the bride and the bridegroom on the stage ( I find that ritual weird though). Inside decor is like you find in farmhouse or banquet weddings. Simple yet a bit flashy. Then you have a live Pasta / Pav Bhaji counter, a Savoury snacks counts, a drinks counter, Buffet spread using basic serving dishes as in a shadi, and of course a separate salad, soups and a dessert counter. Not very excited but we had no choice.   So, sat down right in the middle of the restaurant. I thought, if not food, let me enjoy by observing people around.

When we had entered the place was less than half full but by the time we left, there was waiting outside. Families came in hoards. Large gatherings, birthday party, friends nights out and many like us who had come to enjoy the evening.

It was a shadi-like environment with a significant amiss of Band, Baaja and Baaraat. No loud music, no jazzy clothes, no dancing and no loud talking. Good signs. 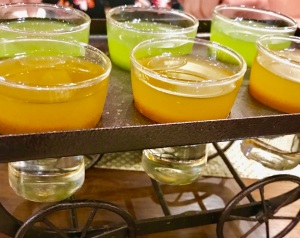 As soon as we settled down, we were quickly served platters of masala filled Pani Puris, our very own golgappas, and a variety of flavoured waters to go with those. Both the things sat beautifully there in front of us. The first ball filled with mint water that went into the mouth, though with a bit difficulty as was huge in size, told me it was brilliant. The golgappa was crisp, the filling was flavourful and the water was tangy and cold. In no time, we

were done with two rounds and the tone was set to what to expect from the place.  Next came a beautifully decorated colourful plate of Dahi Bhalla Chaat. But no, the server informed it was Palak Patta Chaat. It had all the ingredients of a chaat, Dahi, Mint and Saunth Chutney, Pomegranate seeds, Bhalla and fried leaves of palak. It was so refreshing that one couldn’t resist finishing the whole thing.

Now was the time for the starters ( remember we were vegs). A stream of servers  kept coming to us with Dahi Kabab, Paneer Tikka, Mirchi Fry with Soya sauce, Shami Kabab, Crispy Corn and Tandoori Aloo (isn’t it sounding like shadi spread). For me, the snacks were just fine, nothing great but yes not bad for tasting and starting off. Children got excited with the white sauce pasta so ordered one portion ( like you do in a Shadi). Was quickly made at the live counter and served. Was good looking and tempting. Had all the ingredients which are used in a specialty restaurant and it tasted great. Hot, fresh and flavourful.

The starters had done their job quite well and by this time, I was no more hungry but decided to go around the buffet spread just to have an idea.

Typically, it had two soups- North Indian favourite sweet corn in veg and chicken lemon coriander in non veg. Spread had a corner having noodles and sweet & sour veg. Followed by four veg main course dishes and two Dals, both yellow and our very own, must have, Dal Makhani. Then you had four dishes of non veg items, an oriental chicken, Andhra Style Fish, Butter Chicken and Mutton Curry. Hold on !! Still not over. You had a veg Kala Moti Biryani and a Non Veg Biryani. Then there was a whole spread of salads and desserts including to die for Moong Dal Halwa, Gulab Jamuns and a variety of ice creams.

Couldn’t resist so helped myself to 2-3 spoons of Dal Makhani , Paneer Butter Masala and a slice of Garlic Naan. Dal had that typical smoky flavour of a highway Dhaba with creamy texture and the paneer too was buttery and flavourful. The naan was soft , moist and fresh. Went really well with the dishes. 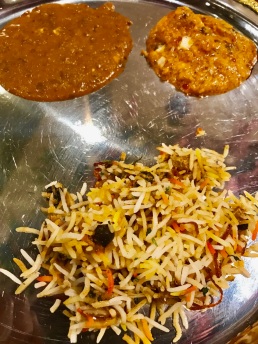 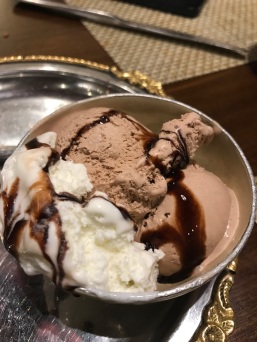 If the veg dishes tasted so great, I am sure the non veg dishes too would be worth enjoying. So, during a wedding season, if you think that your PR has gone bad and you didn’t get any invite, head to BBB and you won’t miss the food at least.

The message is, two themes, one is a fine blend of Indian and Afghani Mughalai and the other is typical wedding spread, both stand distinctly in their spaces and serve great food to tantalise your taste buds. You may want to give it a try. Go ahead…