Let me today mention names of few places to you – Tundey Kababs in Lucknow, Paradise Biryani in Hyderabad, Karims, Al Jawahar, Andhra Bhavan canteen or Sita Ram in Delhi, Mocambo or Flurrys in Kolkata, Britannia in Mumbai, Pal Dhaba in Chandigarh, LMB in Jaipur, 56 Market and Sarafa Bazar in Indore, Saravana Bhavan in Chennai, Kanha and Kesar Dhaba in Amritsar, Chawla in Ludhiana, Panchhi in Agra, Brijwasi in Mathura, Thaggu and Banarasi in Kanpur, Kayani Bakery in Pune, Atithi and Induben Khakhrawala in Ahmedabad, etc etc .  This list can be really really long. Do these names ring some bells in the mind ? To most of us, may be yes. For, when you go to these cities, either you would have them on your mind or someone will tell you to go there to eat 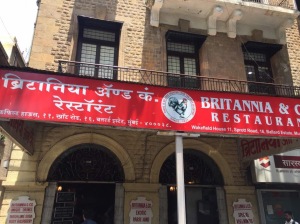 because they are famous and have become synonymous with the city.

Famous Food Blogger and author Kalyan Karmakar, in his book Travelling Belly, mentions that in each city there are popular places which are tourists attractions and are “Touristy” in nature. These places necessarily do not serve the best food. People want to visit those places because they don’t want to miss out on that but for the “good or tasty” food one may have to find out/ reasearch a bit and one may come across a few in each city which would be serving a much better food.  These not so famous places may not be the best and comfortable places to sit and eat. But for sure, it may be serving a great food and would not burn a hole in your pocket.

Come the month of Ramzan or Ramadan, as it is known, there is an air of food and festivities all around. And, for food loving people, this is the time to explore and gorge upon some great food.

India has muslims in every part of the country, East, West, North and South. So are their eating habits. And so is the food that matters in these respective regions. An article in Hindustan Times a couple of weeks ago gave a good description about this diversity.  While, one may eat many a things during the festival but each place has its own speciality and that you would not be able to get that magic recreated anywhere else in the country. 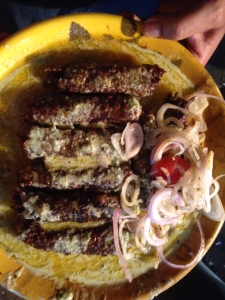 In North India, for the people in Delhi, besides many other dishes, it means a festival of Kebabs, Mutton Stew, Nihari and Khamiri Roti. A visit to Jama Masjid area is a must for both Muslims and non-Muslims for the good food calls everyone beyond religion.  In Kanpur it is impossible to imagine Ramzan without Paye (trotters) Ki Nihari. The dish is most sought after during this time of the year. Other favorites, of course are, Biryani, Boti Kabab & Roti and the iconic Tundey Kebab from the neighboring city of Lucknow. In Kashmir, a sweet Sharbat of Baebri Boel Seeds is popular. It is a milk based drink having overnight soaked seeds, cardamom and dry coconut.  In Bhopal, it is Nukti Khaare which is the snack to go for during fasting period. It is a combination of three items Nukti a sweet made of gram flour, anardana, a slit made of black gram and our very own Sev, known as Khaare.

In the Western part of the country, Mumbai stands tall and one can enjoy a wide range of food all the year round. You have Muhammad Ali Road, Bade Miyaan, Bohri Mohalla, Fort etc etc. One place and one dish which is synonym with Ramzan is Baraah Handi in Bohri Mohalla. It is an age old eatery serving an array of seven meat dishes which are to die for. It is slow cooked for over 10 hours in spices and other ingredients which renders a delightful meat curry which is to be experienced.

Down South in Kozhikode, Kerala it’s time to enjoy Biryani in the main course. However, what catches the fancy of fasting people and others, particularly in north Kerala, is the Unnakaya, a sweet dish made of banana and grated coconut.  The other dish of south which is quite famous almost in the entire country is Haleem from Hyderabad (I had written a detailed story on Haleem from Hyderabad last year). It is made of goat meat and pounded wheat cooked together in ghee for many almost 10 hours or so.  It is said that you may find Haleem at many places in the country but no

one can beat the one from Hyderabad.

Then coming to East, in Kolkata,  for eating it is festive time all the year round. Eateries of all kinds and size dot the city (and the state) serving different cuisines. Kolkata Biryani, Mutton Pasanda, Mutton Chops, Rolls, Kebabs are available in plenty all the year round. Kolkata Biryani holds place of pride when Biryanis from across the country are listed.  However, it is the humble Bhajiya-a fried potato and spinach snack that comes to the forefront during this time.  There is one Haji Aladdin Sweet shop which makes it during this season only and sells it at quite a price and still runs out of stock quickly.

While there is  famous dish for each place and each occasion  but it’s a prized catch to be able to find a great place serving local delicacies and enjoy an authentic dish at a much lesser price.  Let’s see how ?

Every year, during this time, it is customary for me and my foodie friends to visit the iconic Jama Masjid area in Delhi during one of the evenings. In the initial years, it was Fried Chicken, Kebabs etc from the famous eateries followed by eating the main course at either Karims or Al Jawahar.  Now, these days the trip starts with enjoying few of our non-negotiable choices such as Buff Seekh Kabab and Burrah at Lalu Kababi (not the the famous Qureshi anymore), Changezi Chicken at Darya Ganj corner and a few others. That is it !

This time, we intentionally ditched Karims and Al Jawahar.   We started walking a little further down from Karims, deep into the bylanes of Matia Mahal. 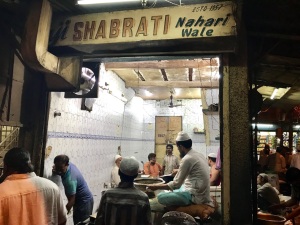 My reasearch had told me that you get a great Nihari there. With two Sanjays in the tow, Chef Sanjay Pawar and Sanjay Malhotra, I led the way making our way through the human sea and finally reached our destination in a narrow lane and there it was – Haji Shabrati Nihariwale.  A tiny, rustic hole in the wall kind of an age old eating place. The signboard which had almost worn out said that it was established in 1957 and the only visible thing from out side was a lone huge Degh (an aluminum vessel normally used by muslims to cook) and a middle aged person sitting next to it.  From the narrow passage in front of that vessel, we managed to reach the interior portion of that eatery and the place finished even before starting.  The place had just 2-3 old tables with benches which, if all occupied, could accommodate maybe 10-12 people at a time.  One old fan runs over your head and a lone desert cooler which has no sides pushes air from outside. We sat down just next to the cooler to fight out our sweat but the gush of air kept us on our toes to protect our plates and glasses lest they are swept away. Luckily, the  place was not very crowded at that point of time and we could get a better attention of the owner Mohammad Iliyas.  He informed us that the place serves just Nihari (that too Bade ki) and the Khamiri Rotis.

Between three of us, we ordered both Nalli Nihari and Bheja Nihari.  Nalli Nihari is of Paya (trotters) of Buff and Bheja is goat brain. The man sitting next to that huge degh first ladeled out curry into the quarter size steel plates and then scooped out Bheja from a dish and served in one plate. In the other plates , he picked up huge trotters which are cooked and kept separrately and emptied the entire bone marrow into the curry.  Once done, he pulled the tender meat out from the bone and discarded that trotter bone.  The bone was then added to the curry and served to us. A quarter plate full of dark brown gravy laden with floating oil and chunks of meat floored me with just the looks (avoid looking at the almost mangled steel plate).

Couldn’t wait for the roti and immediately took a spoonful of the curry and tasted it. Hot, a slightly spicy, smooth, basic yet complex flavours combined with the taste of meat and bone marrow was a riot on your palate.  A chunk of meat was extremely flavourful too.  I am not a great fan of Bheja but was quite creamy, slightly hard but flavourful .  While we were occupied with the beauty and flavours of Nihari, the Khamiri Roti was served. A hot and fluffy, golden coloured fresh bread dished out straight from the tandoor and was on to our table.  The aroma of freshness was oozing out of it.  Quickly a morsel was torn and it said it was fresh, soft and a delight.   Combined with the Nihari, it was a food made in heaven.  While one would enjoy the Nihari with that roti, however, one can have both separately too as both are a great stand alone eats too.

A little talk with the owner revealed that the elder Haji Shabrati established this shop in 1957 and a total of about half a dozen employees work here. The oldest employee has been there since last almost 20 years and has seen the fan following growing of this place.  He said that by late evenings, this place is full and one has to wait for a while to get in.  The place normally opens for about three hours in the morning and then for the same time period in the evenings.  The masala for the gravy is made at the house of the owner and is a secret, rightly so.

We were delighted and full with the food and when asked for the bill, it was almost a little over hundred bucks per head including for the water and cold drinks ordered from outside.  What a meal !!! One could go back there many times over.  And I am sure there would be many more jewels hidden in those bylanes which are still to be explored.  For example, on our way back, a small hole in the wall was selling freshly made Sharbet with chunks of Watermelon in it, a shop selling great Shahi Tukra, again a small shop selling some amazing Rabri and Firni.  Ufff !!!!

So, the moral of the Food Story is that look out for these local joints and they will surprise your tastebuds and pocket too !!!