Those who love oriental cuisine, this may sound music to the ears.  Those who don’t or are not aware, for them it could start a love for it.   Therefore read on, this could be interesting.

Till about a decade ago, I had no idea if there was a dish called Prawns Tempura. While attending a party in a hotel in Goa, I was served a prawns snack which was a platter containing straight prawns, not curled, covered in a brown colored crisp vermicelli sort of thing and was deep fried.  It was crunchy and nutty and got you the flavour of prawns once you reach the meat.  Frankly, I liked it a lot.  Thereafter in many cities I tried the Tempura but everywhere it had a different look and at most places it looked like a prawn pakora or to sound sophisticated, a fish orley sort of a fritter.

Then few years later, though I don’t remember its local name, I tasted a msimilar prawn snack in Guangzhou, China.  The prawns, curled, were deep fried and covered with bright yellow crisp strings of thin egg noodles which resembled our very own local bhujiya. Prawns were flavorful and soft while the outer covering gave it a crispy and nutty look and feel.  After a long time, it reminded me of my first encounter with the Prawn Tempura in Goa.

So, big deal ?  Why am I reminiscing Goa and China for Prawn Tempura ? Actually, this was a build up to the story about my a very recent experience.

Once again, Chef Sanjay Pawar had discovered yet another eatery and early this week invited me for lunch at Shophouse By Kylin on the Golf Course Road in Gurgaon. It is a casual dining restaurant serving Japanese, Chinese and Thai cuisine.  We ordered Double Cooked Pork Spare Ribs with Honey Glaze, Char Sui Pork Bao, Seafood Penang Curry with Sticky Rice AND Prawn Tempura, which Sanjay added in a whiff before closing the order.  The dishes came one by one and each one was amazingly delicious. I will talk in brief about each a little later but foremost, The Prawn Tempura !!

Sitting in a wide bowl there were large prawns, straight and not curled, covered with   off white fluffy yet crisp batter dusted with red chillies sort of powder and the light red tail of the prawns peeping out of the white cover.  What a sight it was.  Looking at it, one couldn’t wait any longer and we quickly served a couple of prawns in our plates.  Picking a piece you could realize the fluffy outer layer was hot, crisp yet fragile, signaling “handle with care” lest you lose me.  The fingers didn’t get any oil on it despite being deep fried. A quick bite gave you that crisp snow on to your palate which had the flavours of freshness of rice ( sanjay told me that typically Japanese prepare the batter with rice powder and bread crumbs).  By the time your bite quickly reaches the prawn meat, you realize it is fresh and flavourful. After a bland yet freshness of the outer cover, the sweetness of prawns blended with the aroma of seafood takes you to another level. The first prawn was savoured as it is.  The second one was then dipped in the Tempura Sauce and the the sweet-salty flavours of the sauce did wonders. The taste and the flavours of this particular Prawn Tempura worked the best for me since I 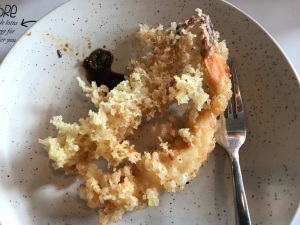 have started eating this.  It is an experience in itself and words fall short.

Tempura is typically a dish popularized by Japan wherein seafood or vegetables are battered and deep fried. A light batter is made of cold water and soft flour. The batter is often kept cold by adding ice, or by placing the bowl inside a larger bowl with ice in it.  Chef Sanjay tells me that in the authentic Japanese Tempura, the breadcrumbs ,used for coating, before frying, are not the usual ones.  These are known as Panko and that he shall try to get a pack for me, soon.

I am delighted with the Prawn Tempura and also at the very thought that I would get Panko. Let me now turn to the next Hero dish of this piece – Seafood Penang Curry with Sticky Rice !!

I had never tasted Penang curry earlier, so looked forward to it. In a bright red bowl, came the dish.  A mound of sticky rice, topped with a fresh red chilly,  was surrounded by an off white colored thick gravy laden with chunks of fish, prawns and wild mushrooms. The aroma which was coming out told me that it was freshly made and was mildly spiced.  The gravy was very flavourful and had a blend of flavours of coconut cream with ginger, garlic, peppers and a hint of sweetness.  All this coupled with the flavours of fresh seafood and mushrooms took the entire dish to another level.  Sticky rice were also very aromatic and as compared to regular versions, were relatively thicker in size.  First I enjoyed the curry on its own and then with the rice. It is indeed a complete meal in itself and amazingly flavourful. The flavours and the aroma certified the quality of ingredients used and the skills of 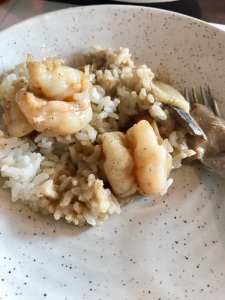 the chef to churn out a wonderful authentic dish.

Penang Curry is a type of  Thai curry that is thick, salty and sweet, with a nutty peanut flavor. Athough it is also often referred as Malaysian too because of Penang being on the border of Thailand and has infusion of ingredients from Malaysia. It’s main ingredients are dried chili peppers, galangal, lemongrass, kaffir lime zest, coriander root, coriander seeds, cumin seeds, garlic, shallot, shrimp paste, salt, palm sugar and peanuts.  It typically contains thick coconut milk and has very little other liquids added. Use of ground peanuts is what makes it a bit different  than the Thai Red or Green curry and is slightly sweeter than the others.

I am totally sold to the Penang Curry.

I know, at the start of this write up I did speak about Double Cooked Pork Spare Ribs with Honey Glaze and Char Sui Pork Bao also.  Will  surely come back soon to share their flavours and pictures too.  Till then…..

I was at this #Microbrewery in #Chandigarh, about a fortnight ago. Today, was just surfing their page on FB. Found this on their page 😊 @brewestate
In a stay of less than a day in Chandigarh, I had Beer, Lassi, Missa Parantha, Anda Parantha, Tangri Kebab, Mutton Rara, Dal Makhani, GolGappe, Tikki, Chat and what not. Even a dinner with a Celeb !! You want to know where? Read the story in the link :
I would have had a Cream Roll after decades. Was very fond of it in school days. A couple of weeks ago; picked it up from Mohan Bakery, Ambala and am glad I did. An amazingly flaky crust wrapped in it a rich quality cream and aptly sweetened. A dash of Chocolate completed the experience. One of the best 👍
If you have a sweet tooth like me, then when in Jalandhar, do not miss this amazing Jalebi, Kulfi Falooda and the Plum Cakes. You could thank me later.
#WeekendCooking in #MyKitchen:
There’s light at the end of the tunnel...and there’s me too there 😊