Last week, I was in Guangzhou, known as the the manufacturing capital of China. Even before I left, my social media timelines started saying that soon the platforms shall have food experiences from there.  Very natural and obvious expectations. Let me tell you that I had gone there for work and that took priority.  Food? Yes, we had to eat so, during my stay of about four days I enjoyed, hold on…Italian (yes, you read it right), Vietnamese (right again), Fast Food, Chinese (obviously) and Indian too !!!! So, I bring here a slightly different Food Story. Here we go.

Of the various meals we had there, two were in upmarket Italian Restaurants. One we  had in Oggi Trattoria, in the posh Canton Place and then in Hanging Garden Art Cafe in Redtory.  Across these places, we had Chicken Pizzas (of course), Arrabiata Penne Pasta,  Baked Rice with Chicken, Onion & Parmesan Cheese, an interesting looking Potato Wedges and, of course, no Italian is complete without a Steamed Salmon with Veggies.

The Pizza at Oggi (I am told it is an award winning Italian Restaurant in the city) was very flavourful. The aroma of the freshly baked base was amazing.  The sauce was tangy and sweet and the chicken was succulent and flavourfully seasoned.  A drizzle of Olive Oil on a slice would make it moist and further flavourful.  Penne Pasta 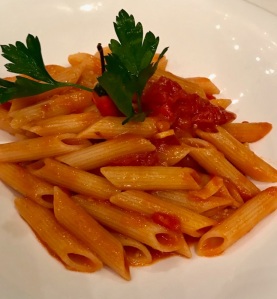 again was a delight with the Arrabiata sauce done with just the right amount of flavours.  Was neither too tangy nor too sweet.  A touch of basil flavour provided it a distinct taste.  The Potato Wedges which we called for as  a side dish was so interesting to look at that we attacked it first and didn’t rest until it was over.  A sprinkle of crushed black pepper and a dash of olive oil did wonders on the palate. 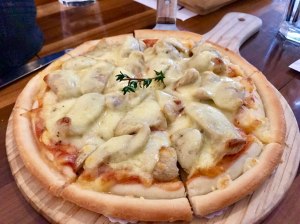 However, the Chicken Pizza at the Hanging Garden lacked flavours.  It came across as bland. The base, though was fresh and aromatic but the over dose of cheese didn’t allow any other flavour, even that of meat, to standout.  The baked Rice and Chicken dish was hot and came directly out of the oven (I almost burnt my fingers handling it). The upper crust of cheese was dotted with Chicken, Onion and tomato which was

sitting atop a bed of goldenish rice. The rice were a bit sticky, the cheese was perfect and the chicken and onions were seasoned perfectly. The best part of the meal was that huge slice of Baked Salmon seasoned with salt and black pepper.  The steamed fish was soft and flavourful. The sautéed veggies went very well with the fish which was a complete and healthy meal for one person.

So, an Italian meal in China is actually not a bad idea.

There is this Red Chilli Restaurant, again in the upmarket Canton Place.  I had eaten there last year also and  had liked the food.  So, this time a visit to the place was  a must.  We ordered a Flamingo of Asia (a cocktail of Rum, Apricot Brandy, Lemon Juice, Ginger Beer and Baasil Leaves), Green Papaya Salad (with Grilled Chicken, Basil and Peanuts), Sliced Chicken Salad (with Cabbage, Pineapple, Basil, Lime and Fish Sauce), Garlic Bread and the hero dish- Stewed Sea Bass Fish ( with spicy and lime served on iron stove).

Of our order,  naturally the drinks came first. A pale yellow concoction, having lots of ice looked very inviting in that cold evening.  A minty-gingery ale infused with white rum was a deadly combo in taste and potency.  You didn’t require a second one and gave you enough warmth and appetite.  Next came in the Garlic Bread which we polished off instantly with the drink.  Bread was crisp and buttery, however, that usual punch of garlic was a bit mild.  The Salads which landed on our table were an eye catcher.  The Sliced Chicken Salad had that aroma of sea food, crunch of Cabbage and Sweetness of Pineapple.  The Chicken was soft and juicy. The Prawn Crackers which accompanied were a great hit with the drink. In the Green Papaya Salad, the Papaya was grated like noodles and interspersed with peanuts.   Atop sat the grilled chicken which was well done.  The sweet-tanginess of the Green Papaya provided that freshness of flavour, nuts gave the crunch and the Meat blended well with the flavours.

By this time, our drink was over, appetisers were over and the Appetite was ready to welcome our Stewed Sea Bass.  A ship like vessel came with a in-built lit stove to keep it warm.  The creamy color stew was interespersed with Tomato, Red Capsicum, Leek, Red Chillies and garnished with lots of Mint Leaves.  The broth was hot, a bit spicy, and had a hint of mint and a mild sweet aftertaste.  The fish inside was large, soft and full of flavours. 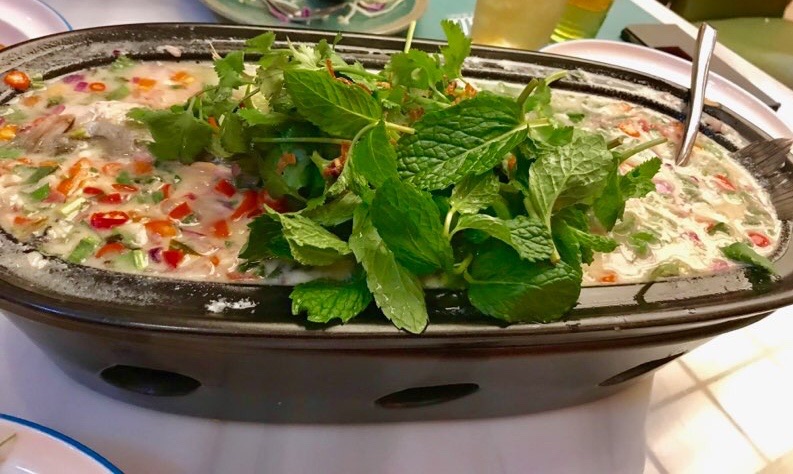 So, a Vietnamese meal in China is also not a bad idea.

About 170 KMs from Guangzhou is a city called Zhuhai which is close to the border of Macau. We had gone to Zhuhai for work and our host factory officials ordered some lunch for us from the nearby Pizza Hut outlet.  We were offered Chicken Pizza (a natural safe choice considered for visiting Indians), Crusted Prawns and Crusted Shrimp Balls. 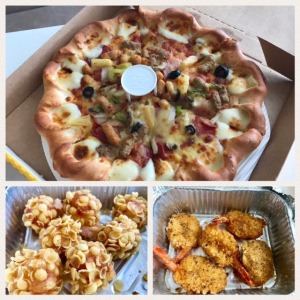 Chicken Pizza was just ok.  Having eaten authentic Italian versions over past two days, this commercial version didn’t come nowhere near. Plus, the crust or may be the chicken gave a whiff of the pungent oil which one normally comes across at the street food vending points in China. Indians doesn’t relish that peculiar pungency. The breadcrumbs Crusted Prawns were a delight to have. They were reasonably big, soft and flavourful.  Similarly, crusted Shrimp Balls were also very flavourful.   The outer layer was quite crunchy and the shrimps inside were moist and soft.

So, a fast food in China is also Ok, if you want a quick grub.

One of us was missing Indian Food badly.  So, we were taken to Bombay Grill, an award winning Indian Restarant in the city.  We ordered the Customary Dal Tadka, Rogan Josh, Chicken Curry, Keema Naan and Tandoori Roti.  In short, we didn’t miss India even for a while neither in the ambience nor in the flavours. Everything was close to authentic. 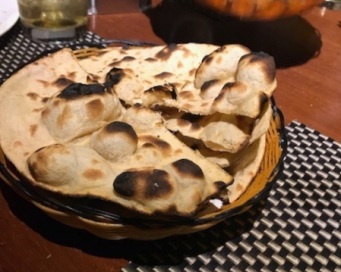 So, An Indian Food in China is also not a bad idea.

Of course, we had our share of authentic Chinese cuisine. We had lunch in an upmarket Restaurant Ease in Redtory. We ordered Steamed Veggies, Stewed Fish, Fried Chicken sautéed with Cabbage and Beans, Tofu Curry, Mushroom & Onion and Braised Lamb.

To start with, Steamed Vegetables were a riot of colours sitting atop a white dish.  You would pick it up without waiting and yes, was seasoned well, light on tummy and  a great  way to start.  Stewed Fish came in a  huge serving  dish. Again it was  a riot of colours with chopped Red Chillies

covering the  major part making the dish very very hot. The soupy Stew was a delight to  taste.  Fish was soft and silky albeit  one had to steer clear of the Chillies. Fried Chicken with Cabbage again was an excellent combo.  A hint of soya and the oil in it with a flavour of chopped red chillies was very flavourful.  Tofu Curry exactly resembled our very own Paneer Masala.  In fact the silky and soft texture of Tofu scored over our Cottage Cheese.  Mushroom & Onion was mildly seasoned preparation again with a flavour of oil and Chillies, not very hot though.  The Braised Lamb was a bit tough but had  the flavours of the meat with mild seasoning and had a textured crust having soft meat inside. 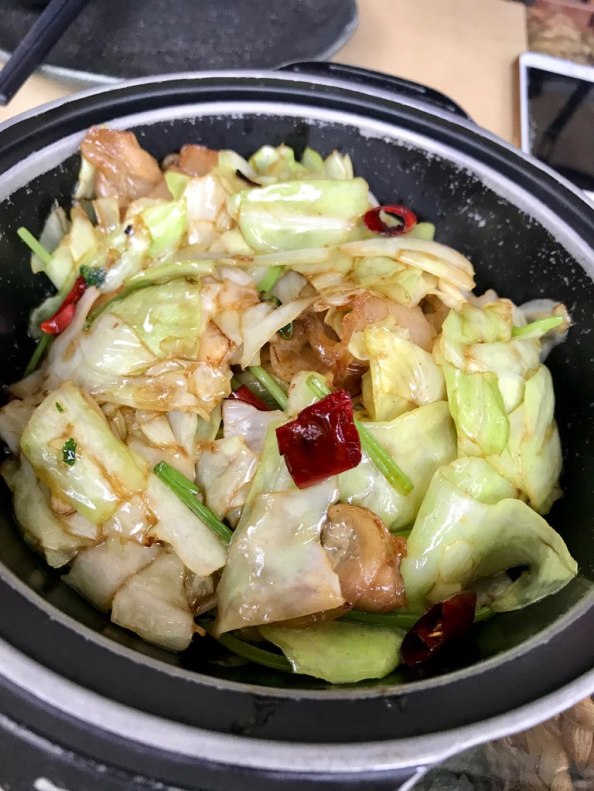 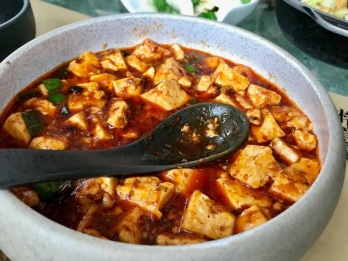 It was a grand party organised by our office staff in a party place in China and I  was spoilt for choice of food.  I may not be able to spell out the Chinese names of the dishes correctly, so better stick to the basic descriptions. We had Fried Chicken with Skin on (was a bit oily but crispy outside and succulent 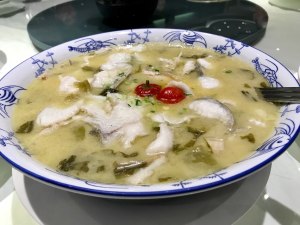 inside), Lobster with Veggies (was a divine combo of sweet and soft meat albeit a bit difficult to manage without messing), Lamb Stew (was very flavourful and spicy), Sautéed Squids (a bit tough to manage and high on salt), Fish Stew with Cherry Tomatoes & Greens (an amazing concoction where the fish meat was soft and silky and the soupy broth was flavourful), Egg Whites Sautéed with greens, wild mushrooms, tomatoes & pine nuts (was a amazingly flavourful and yet very mild and light) and Fried Pork (was very oily and high on salt). 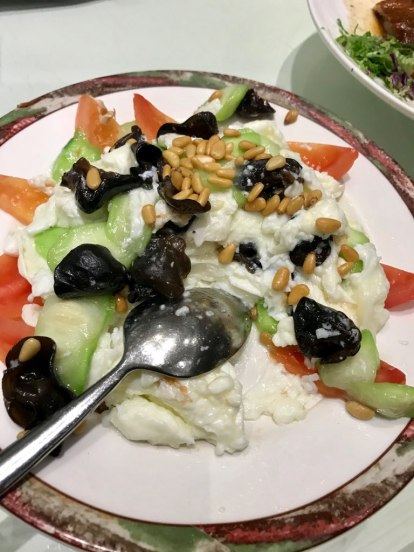 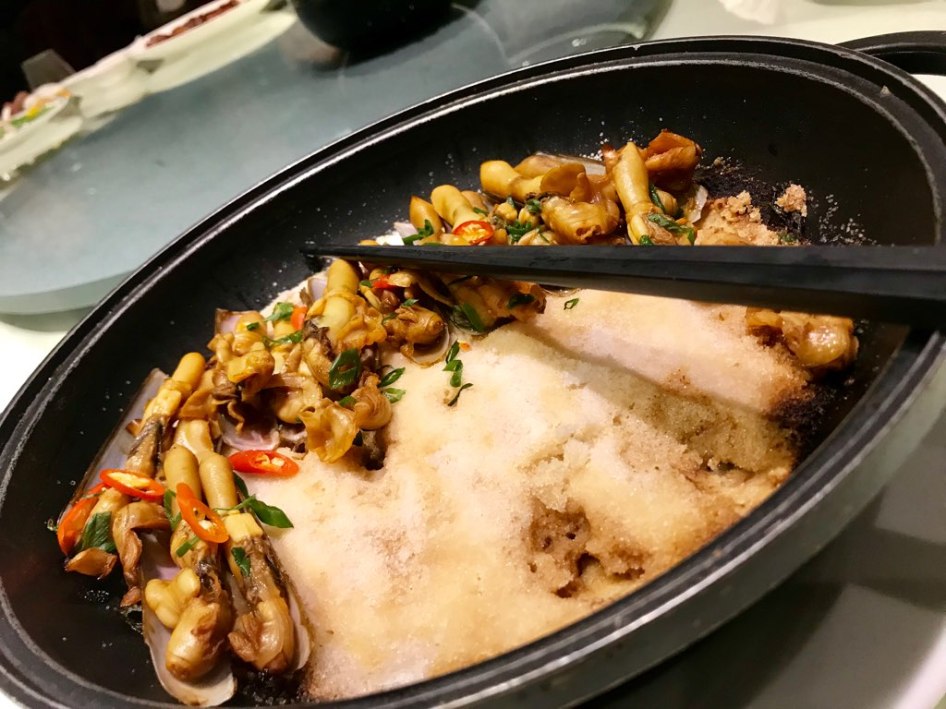 How could one leave out our very own items, which define our version of Chinese- Spring Rolls, Fried Rice and Noodles.  And yes, there I also had Samosa there.  Yes, you read it right- Samosa !

So, if had that bad feeling of not being able to try Street Food or Local Restaurant Food, I am very happy having been able to try various cuisines there and the experience had variety and of course great foodie delights to enjoy.

3 comments on “In A Chinese City : Different Cuisines And Many Flavours”