I always wanted to try Naga Cuisine but somehow never got a chance. The moment you mention Naga to any North Indian,  the images about the food from this North Eastern state seem to be quite weird.  This actually is not the case, by and large.  So, about two weeks ago, when I was in Guwahati, Sanjay Debnath suggested Naga Kitchen Restaurant in the city but with a warning that I might find it a bit bland. I insisted on Naga and yes, was surely in for a pleasant flavourful experience. 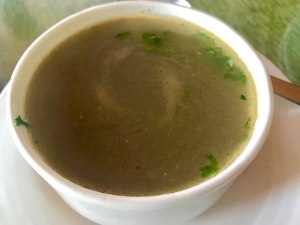 To start with, we ordered a plate of Steamed Chicken Dumplings. Soon, six big size Dumplings, sitting pretty in a plate along with a fiery Chutney, came in. Along with it came a bowl of Chicken Soup. Immediately my mind went to the combo of Cho-Cho Momo, a Tibetan delight and about which I had written earlier here. This pale yellow Chicken Broth had a layer of shining fat on it and was piping hot. The first spoon in the mouth told that it was flavourful, high on black pepper and ginger. Gave a satisfaction of an enticing soup with a good peppery kick. It was so hot that soon, the sweat starting appearing under the eyes. Surely, it triggered the hunger. 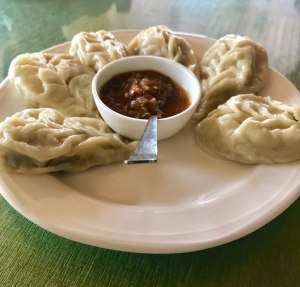 Quickly, a Dumpling was shifted to my plate. It had a leaf like design and the glaze of oil on it. Ditching the fork, I used my fingers to have a bite. The outer layer was fresh and soft, the meat filling inside was mildly flavoured with spices. The meat was so juicy that it almost dripped on my shirt. In no time, between the three of us, the dumplings vanished, leaving us asking for more.

Next came in a Fried Pomfret well hidden beneath a bed of rings of onion, lavishly sprinkled with red chilly powder. One had to clear the veil of onions to have a glimpse. A medium sized Pomfret appeared to be quite crispy covered with a dark yellow masala. I was told that the outer cover was done with spice mixed rice flour. One bite and it was an amazing experience. The outer was very crisp and flavourfully hot with spices and the fish inside was super soft. It was fried yet no trace of oil. Once again, in no time, the entire thing vanished.

Now was the time for my Smoked Pork Thali !!

I was expecting a brass Thali to arrive with various small bowls full of items. The expectation was to the likes of Parampara and Khorika Thalis I had earlier written about here. Instead, the staff started bringing dishes in serving bowls separately and gave us individual plates for serving desired quantities out of the dishes. On enquiry, the staff told that the Thali comprises all the dishes but are served like this. Never mind.

So, as part of my Smoked Pork Thali, I was served Aloo Pitika, Chilly Pork, Boiled Vegetables, Naga Curry, Smoked Pork with Bamboo Shoot and Rice. It appeared to be a riot of colours and aroma on the table.

Starting with the first thing first, quickly a portion of Chilly Pork was served. Small chunks of dry pork stir fried in basic spices, sliced onion and tomatoes gave it a look and feel of our regular Chilly Chicken albeit without the soya sauce and the capsicum. The pork was soft and juicy and the sliced onion provided that crunch and the mild sweetness to the spicy preparation. Again, it served as a great starter, third good one in a row.

The Boiled Vegetables was a colourful ensemble of veggies served in an oval dish. A closer look revealed it was Cabbage, Beans and Carrots bathing in a clear soup. I transferred a portion in a bowl. The firm yet soft veggies were boiled in a mildly seasoned broth which, perhaps had salt and pepper only. More or less, these were veggies in a stock. It was a delight to savour these as the freshness and taste of veggies was intact and the moist coating of stock provided the flavours. One could have it on its own as a starter. I tried it with a portion of rice too. Went very well with steamed rice.

Thereafter a small portion of rice was topped with two ladles of The Red-Yellowish Naga Curry. A swirl of service spoon in the dish told me it was purely a broth. No veggies or meat in it. This thick soup like concoction gave a tangy aroma from the tomatoes. A spoonful took you back to your school time basic tomato soup prepared at home. It was a blend of tomatoes, potatoes seasoned with red chilly powder, salt and black pepper only. 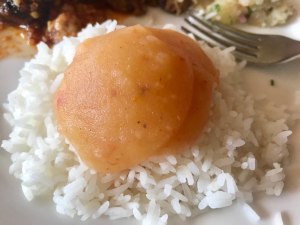 Perhaps a bit of rice flour was also used. Two three spoonfuls quickly in the mouth were a delight to enjoy. It was a bit spicy, hot and very flavourful. Once I served a portion on the bed of rice, it would turn a bit thicker like chutney. The combo took me to the flavours and taste of Tomato Chutney or the Aloo Tamatar Subzi eaten with Steamed Rice. Again, a very basic but very flavourful combo. 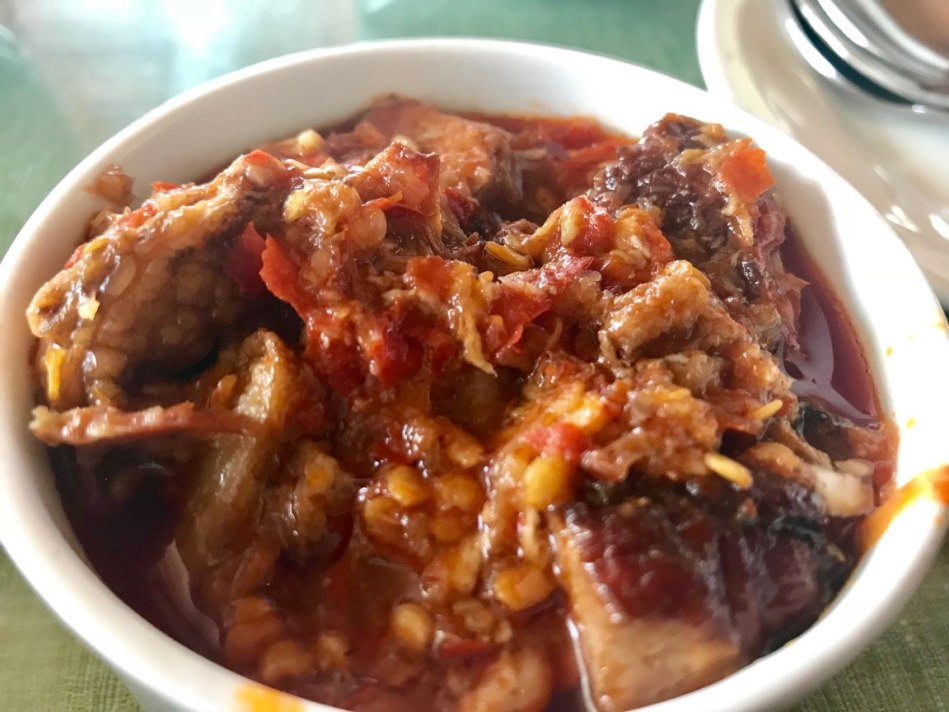 Finally, the best was saved for the last, the hero dish of the Thali – Smoked Pork with Bamboo Shoot. The fiery red Meat Curry was sitting pretty in the bowl. Relatively big pieces of pork along with the chunks of fat were dipped in a curry which appeared to be super spicy and gave a tangy aroma. A spoonfuls on the plate let loose a flow of the red oily curry escaping underneath from the meat morsels. The 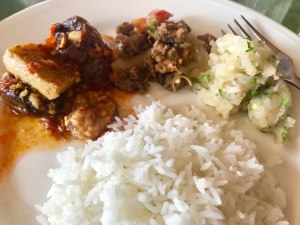 meat was moist and super soft. Had the after taste of smoke and the nutty-woody flavour of the Bamboo Shoot. Was spicy but not that much as the fiery red colour indicated. The red fiery colour was more from the tomatoes used in the curry. The dish went very well with steamed rice. An intermittent use of Aloo Pitika with the 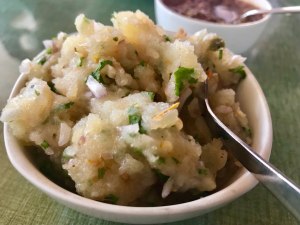 rice and curry was also a flavourful twist. The Pitika was a combo of mashed potatoes having chopped onions, green chillies, fresh coriander and seasoned with slat and black pepper. Also had a hint of mustard oil.

Overall, it was a great Naga Lunch. Very basic flavours, not very oily, simple yet exotic, light and yet an ensemble of tastes- all in one. When in North East, I would certainly want enjoy at least one Naga Meal. In fact, this experience encourages me to visit the cafeteria of Nagaland House in Delhi to relive the experience and see if it’s different here. Chef Sanjay Pawar went there last week and sent me a picture of the Pork Curry which seemed equally authentic. What has been your experience with the Naga Cuisine ? Do write in.

2 comments on “The Porky Lunch From Nagaland”

My lunch today was this Quinoa Powerhouse Salad from @fabcafe.in
HAVE YOU REGISTERED ?
Rajesh Tara In Conversation With @wadhwaaalok, Food Writer & Admn, Gurgaon Foodie, on Friday, 15th October 2021 at 7.00 pm
If you get no nonsense Idli and Vada, drenched in a sharp Coconut Chutney & Tomato Chutney, then you are set for an amazing start of your day. Loved this breakfast in Hyderabad.
I am a Certified / Recognised Creator now !! 😊😊
A good cocktail makes you feel happy….and tipsy too 🤔, I doubt.