Whenever I am traveling, I am always interested in trying out local dishes and from the eateries from where the locals eat. Early this week, I was in Guwahati, Assam for a day. As always, I tried the local food and have a couple of amazing food stories to narrate. Let’s talk of a local Breakfast first. I could never imagine that a local breakfast could be so simple yet refreshing and flavourful.  The only difference is that it was served in a 5-Star but by a local in a traditional style. Quite interesting, no? 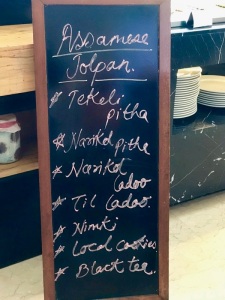 I stayed at Taj, Guwahati.  Next day, before catching the flight back, thought of having a quick breakfast in the coffee shop of the hotel.  The staff took me to a counter set up in the coffee shop which said “Assamese Jolpan” with a few dishes mentioned below it. The contents on the counter looked quite simple and a homely lady was standing behind it. My ever curiousness for trying local dishes encouraged me to ask for one set to be sent to my table. Soon, a plate comprising four different yet simple looking items arrived along with a cup of Assamese Black Tea and a bowl having a sort of Cloud Eggs.

I was told that all the three comprised the Jolpan and is a locals’ breakfast. 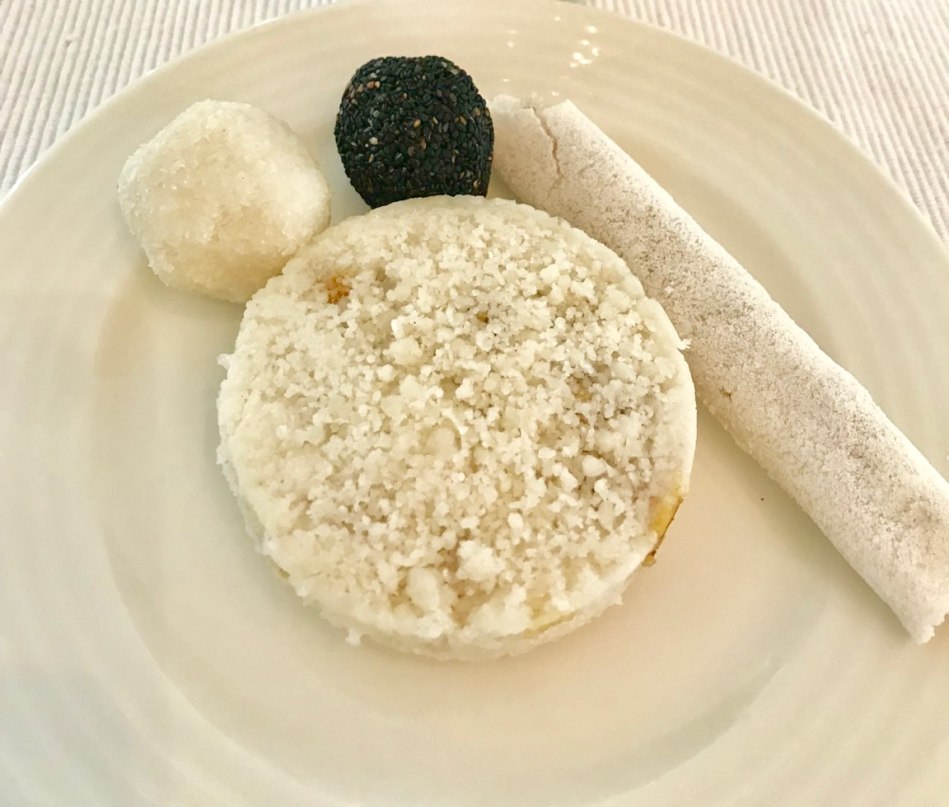 The plate had a relatively big sized round Rice Flour Cake, seemingly a bit hot, with a brownish filling peeping out at few points. This, I was told, was called Tekeli Pitha. With a fork I sliced a quarter of it and tasted. First bite and I was sold. This steamed cake was a bit warm which had a soft outer layer of rice flour and the filling was a mix of jaggery and grated coconut. It was a bouquet of flavours. The rice flour provided the outer soft cover and the filling of jaggery and coconut had a little crunch. The outer layer had flavour of rice while the filling was sweet and nutty. What a simple combo and yet full of flavours.  The more you had it, the more you wanted. In no time, it was polished off.

Next on the agenda was that dark Til Ladoo. It was sitting bright in the plate as if inviting. It was quite a task to break it with your fingers. Despite an effort, one couldn’t take out a chunk out of that ball.  The more you exerted, the sesame seeds would leave the parent mould and fall in your hands. Settling with the lose seeds only, a spoonful in the mouth exploded a blend of nutty-sweet concoction on the palate. The ladoo was a combo of jaggery and roasted sesame seeds. The jaggery used was earthy which bound the seeds together. I was told that the jaggery used was from the earthy lumps made in the country side to keep it authentic.  That makes it a bit hard but has a shelf life. Again, it was very refreshing and flavourful.

Then was the turn to taste the roll like stick sitting in the plate. I was told that this is known as Narikol Pitha. Narikol is a local word for Coconut or Nariyal, as we call it. A crisp outer layer of rice flour, like a Papad, had a filling of the mixture of Coconut and Jaggery. In contrast to the Tekeli Pitha where the filling had more of Jaggery, here the coconut was predominant in flavour with a hint of sweetness of Jaggery. The taste and the flavours were close to our Gujiya in North.  However, herein the outer cover was quite crisp and yet light. Once again, simple and high on flavours.

The last item to be tried out of the plate was the Narikol Ladoo. As the name suggests, it was a combo of grated coconut, mixed in the rice flour, sweetened with a bit of sugar or jagerry and flavoured with a mild hint of cardamom. Again a nutty flavour which had a texture of coarseness. As compared to the Til version, this was soft and not very high on sweetness.

All the four items in the plate were different yet simple. All of them had almost the same ingredients but the variation in quantities of mixing changed the flavours. This breakfast of Jolpan was light yet filling. Of all the things, the Tekeli Pitha worked the best for me and I could have at least a couple of them more.

Traditionally, these are had with Assamese Black Tea. So did I. The dark concoction had a malty yet roasted flavour which was quite distinct. To add to the punch, a hint of cinnamon and cardamom was added. Well, the Pitha and Ladoo varieties did go very well with this black tea. A complete breakfast.

Hold on, it’s still not over.  There is one more dish in Jolpan still to be described. 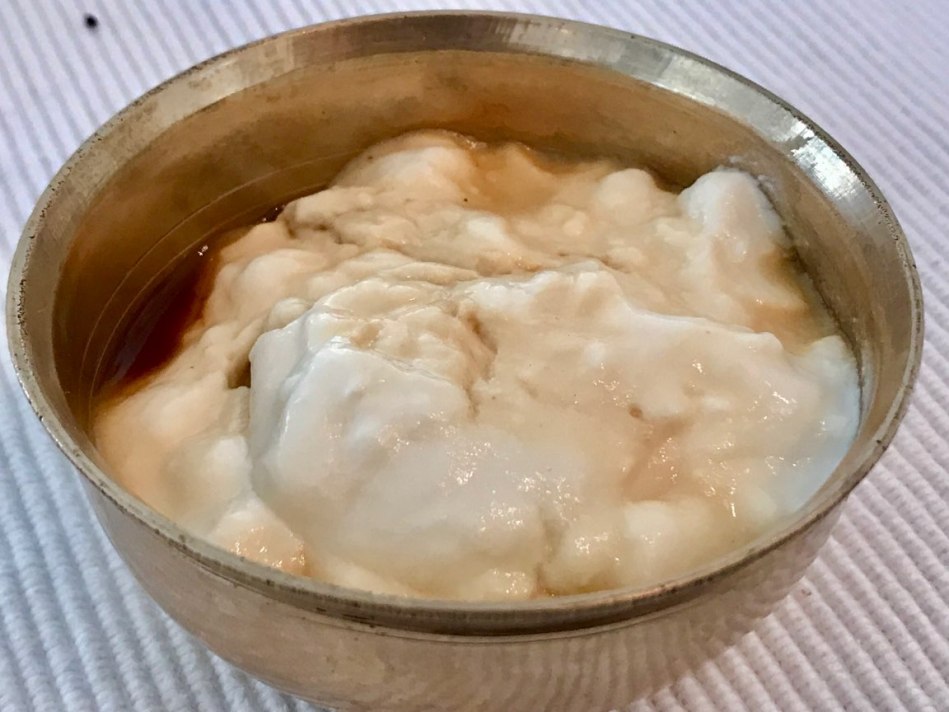 The Cloud Eggs look alike was still sitting pretty there. This actually turned out to be a curd based dish. In a brass bowl sat the curd which was a bit golden in colour, resembling somewhat like scrambled egg whites. A spoonful on the palate and it was a surprise pack of flavours. It had that mild sourness of curd blended with the sweetness of Jaggery syrup and had a flavour of banana. The whole blend had a body of beaten rice flakes, our very own Chidwa (known as Cheera in the local language). In fact this was an Assamese version of Dahi Chidwa. Once again the basic things put together produced a very flavourful dish which could be effortlessly made.

I am told villagers have these in good quantities as breakfast before heading for their farms. This is filling yet light and keeps their stomach cool for working in the sun the whole day.

Having got fascinated with the lovely combo of earthy yet exciting flavours, I was curious to watch how the Tekeli Pitha was made. The lady, Anima Das, at the counter obliged me by giving a live demo of the making of it. First she took out a mould which actually was the lid of the steel  kettle kept on the burner with a boiling water. She first sprinkled a few drops of water on the rice flour which made the flour to look like crumbs. She spread a layer of this coarse powder of rice flour in the mound.  On top of it, she laid a layer of Jaggery which had added grated 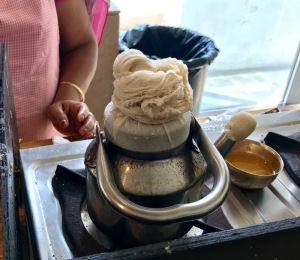 coconut. Again this was covered with another layer of the rice flour. The whole filling was pressed with a mild pressure of palms to fit it into the mould. This was then tightly covered with a muslin cloth and was inverted on the mouth of the kettle with the boiling water. Oh!! It was now being steamed. And that’s from where it get it’s name. Tekeli is a local name for the kettle or the kettlee. After flat two minutes, she removed it from the kettle and with a little pat of hand on the outer side of the mould, the cake came out. Taking pride of her creation, she placed it on a plate and shyly agreed to get clicked. 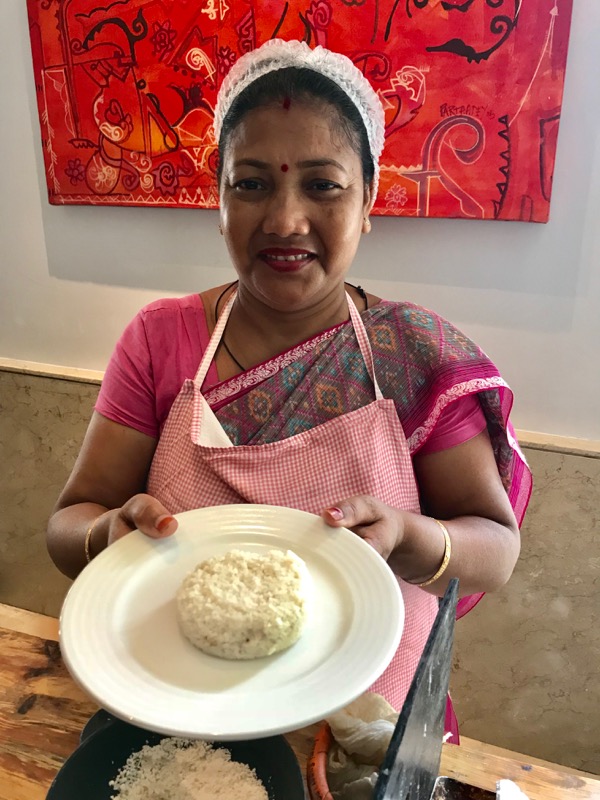 I was told that Anima Das is a local who comes daily to the hotel for few hours to manage this counter in the coffee shop during the morning breakfast. She also trains the kitchen staff in local dishes. Hats Off Mrs Anima Das !!

Once again, my theory of relishing local cuisine paid me off with the Magic Of Flavours and a story which shall linger on for a while in my mind. Do you have such stories ? Do share with me.

I also had a traditional lunch there. Story coming out soon.  Stay tuned…

1 comment on “Assamese Jolpan Is An Enjoyable Traditional Breakfast Spread”