When we talk of Hyderabad, an image of Biryani, followed by Haleem, Patthar Gosht, Spicy Gongura Mutton, Double Ka Meetha, and others cross our mind. Over many visits to the city and various food experiences, I bring here a glimpse of two eateries, iconic in their own unique way. One is a bit upmarket and other a local favourite but both these restaurants dish out some great flavours. Enjoy !! 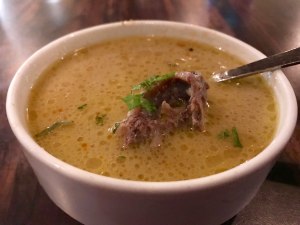 Chef Pradeep Khosla has been connected with me on Facebook for a while but we haven’t met yet. He runs a restaurant with the name, Zaiqa-E-Hyderabad in the upmarket Banjara Hills. I have gone there twice for dinner but couldn’t meet him as he is there normally during the day only. I started with Marag, a Mutton soup speciality of the state. This aromatic soup appears to be a cross between clear soup and broth. As soon as it arrrived on your table, the pale cream broth had a glaze of fat on it it , gave a good enticing aroma and appeared quite tempting. The first spoonful in the mouth released a blend of flavours on the palate. The spices were there and yet not there. Flavour of meat was there and yet not there. After a few spoons of the soup, it was turn of the meat. Oh! It was succulent and very flavourful. A well balanced appetiser in the real sense. 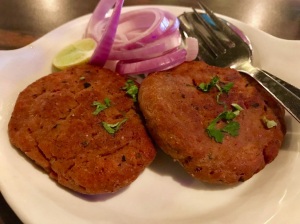 Next came in the Shikhampuri Kebab. A plate had two good sized, Reddish Brown, shallow fried kebabs . Meat was melt-in-the-mouth with a paste like texture. Had mild flavours and a few drops of lemon did the trick. I had expected a bit more of flavours. The green chutney served along with the Kebabs was coarsely done and was quite close to the authentic. Till now, the start was pretty good. 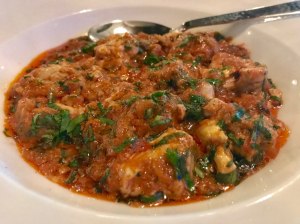 Then I asked for Bheja Masala. A goat brain done in thick curry was a delight to see and gave good aroma. However, the taste was a bit below expectations. The masala of the curry was over powered by the sweetness of onions. The dish tasted more like the north Indian Bharta or Paneer Bhurji (the Bheja was quite soft and creamy though).  Roomali was soft and fresh which went quite well with the Bheja Masala. 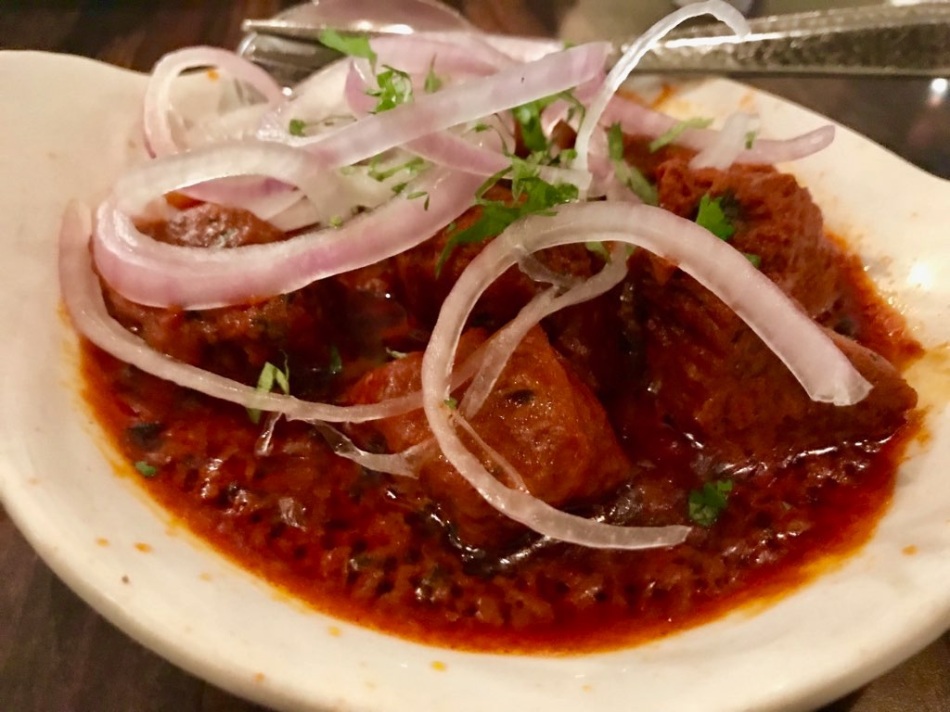 With a very strong recommendation from a prominent Food Critic of the city, Sabyasachi  Ray Chaudhuri, I ordered Tala Hua Gosht with Tandoori Roti. The dish came and conquered.  The royal dish displayed a brownish red shining thick curry with reasonably big sized boneless Mutton pieces. The aroma told me it was rich in spices and ghee. A spoonful on the palate told you that the curry had the authenticity 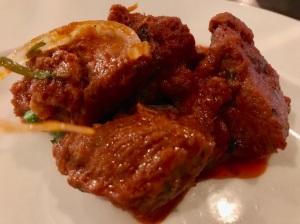 of  Nizam and the flavours of meat, spices and ghee combined made it very rich. The meat was soft and the flavours had gone deep in it. I also tried Bagara Baingan. This yellowish reddish dish was great to look at and equally delightful to taste. The e curry had authentic local flavours with a tangy dash. The aubergine in it was soft, smoky and full of flavours of the curry.  Both these dishes were very enjoyable. 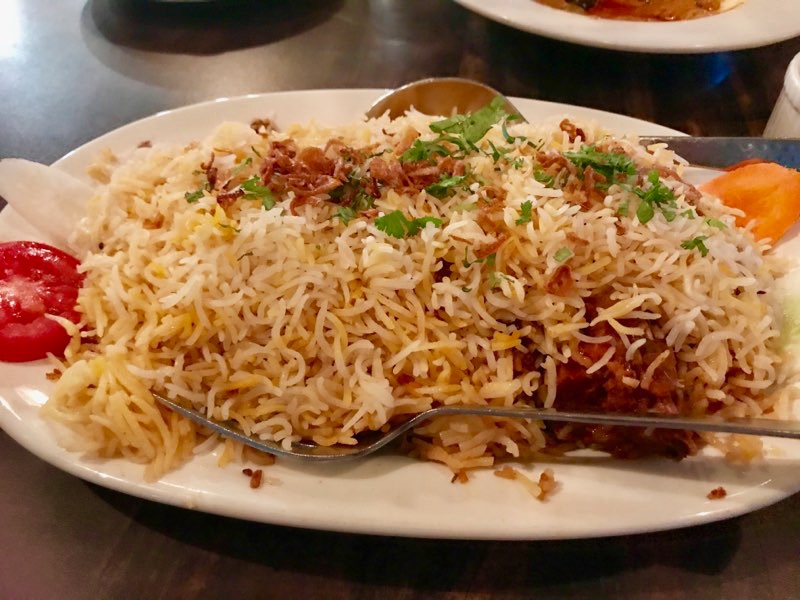 Then, in one of the visits, I tried the Mutton Biryani.  True to the stature of the restaurant, the colours and the portion of the Biryani impressed me a lot.  In an oval dish, a heap of pale white hues of long grained basmati rice had a garnish of fried onion and chopped corriender leaves with the brownish meat peeping out. The rice were flavourful and not very oily.   Meat was coated with flavourful spices and was very succulent.  As compared to other industrial Biryani available in the city, this was mildly spiced and quite flavourful. 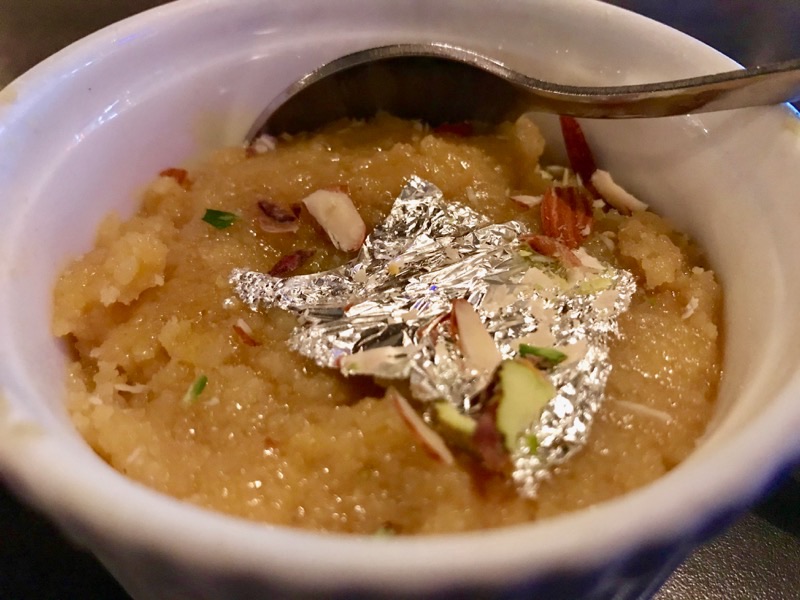 To wrap up the dinner, I was recommended Badam Ka Kund.  I tasted it for the first time and am sold for ever.  Set in a bowl, this appeared as a royal concoction. It is an amazing blend of Dal and Badam. A Halwa which had a flavour of and the crunch of almonds done in the gram flour.  Was not very sweet, yet well done. Not high on ghee yet very moist. I had plans to just taste it but then the flavours and the texture didn’t allow me to put the spoon down. I would not like to miss it every time I go there.

I had heard about this Cafe in Toli Chowk, specially about its Biryani. So had to go there for dinner. 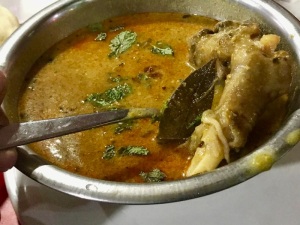 To start with, ordered a Paya Nahari (since it was written under the Nahari section) with Tandoori Roti. First the Roti landed and I was about to faint. It was a giant size roti fresh out of the tandoor. A bite and it was soft and fluffy with a very mild salty after taste. While I was recovering from the sheer looks of the roti, in a sort of serving bowl, this Paya Shorba came. This goldenish yellow thick-soupy dish was 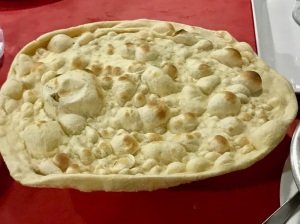 giving out aroma of Mughlai masalas and was piping hot. A spoonful of the soup in the mouth and it was spicy. The aroma of meat mixed with masalas delights you while the bouquet of spices tickle your taste buds. Spoon after spoon would work like an appetiser. The Trotter in the shorba was reasonably good sized. Meat was on the bone but came off easily. It was delicate and succulent with each flavour entrenched in the meat. I could hardly finish half of the shorba served and maybe one third of the roti. 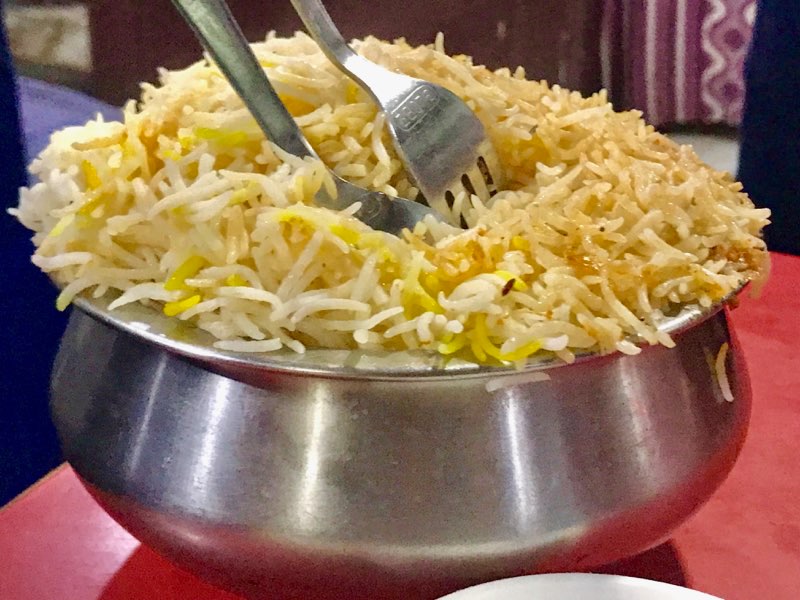 I asked the server for the size of serving of Biryani and he told me to order a single Biryani which would be sufficient for one person. So Mutton Biryani it was. After a while a heap of rice served in, again, a big sized dish landed on the table. It could have easily fed three people like me and none would need anything else. So, this was for a single person? I would have fainted again at the size of serving.  Each rice of grain was separate and no oil visible. A couple of serving spoons in my plate and every rice disintegrated. A mild aroma was coming out of the rice which were moist yet not oily. There were quite a few pieces of meat and when picked, the rice grains would easily fall off. A spoonful on your palate and you would fall in love with it. Mild spices which didn’t over power the flavour of rice yet each grain was coated with the flavour of biryani. Meat was coated with spices and was soft and juicy. Easily, this would be one of the best biryani I have tasted so far. 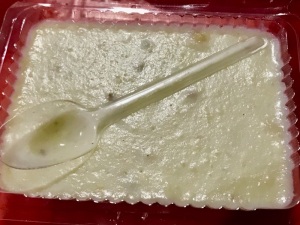 Dinner was wrapped up with a creamy Phirni which frankly did not gave great looks when served. However, it turned out to be a delight. It has the consistency of Rabri and flavour of rice. Was not overly sweet. A bowl of dark reddish colour Khubani Ka Meetha was fresh, tangy and sweet. The fruity punch coupled with sweetness of sugar syrup was a delight to enjoy. 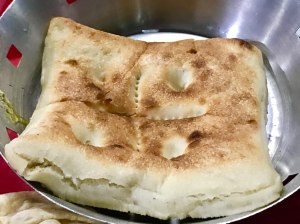 Arvind, my partner in crime that day is a vegetarian. He ordered one mix veg (serving was large and he could only finish half of it) along with a Sheermal. While I didn’t want to spoil his curry, I did try a bite of Sheermal. Unlike what you get in Lucknow, this was a square shape fluffy bread. It was soft and fresh. Had almost nil oil and very mildly sweetened. This too, was a delight to enjoy on its own and with the shorba as well.

At the end, it was Marag and Badam Ka Kund at Zaiqa-E-Hyderabad and Mutton Biryani and Sheermal at Shah Ghouse which would certainly take me there again and again.

Hyderabad has lot to offer in terms of food and its flavours. What I described above is just a glimpse. I still have to try many more outlets which I have on my list.  If you also have similar great experiences or recommendations about the food in the city, do share with me.

My lunch today was this Quinoa Powerhouse Salad from @fabcafe.in
HAVE YOU REGISTERED ?
Rajesh Tara In Conversation With @wadhwaaalok, Food Writer & Admn, Gurgaon Foodie, on Friday, 15th October 2021 at 7.00 pm
If you get no nonsense Idli and Vada, drenched in a sharp Coconut Chutney & Tomato Chutney, then you are set for an amazing start of your day. Loved this breakfast in Hyderabad.
I am a Certified / Recognised Creator now !! 😊😊
A good cocktail makes you feel happy….and tipsy too 🤔, I doubt.