Chandni Chowk in Old Delhi intrigues me a lot !! Every time I go there, I get to try something new. And each time it’s an experience to write back home. The vicinity has so much to offer in terms of food. This time my food adventures led me to try Kulle Ki Chaat, Dahi Bhalla, Matar Kulcha, Chhole Bhature, Chawal Chhole Palak and Hathras Ki Rabri.You can also have this thrilling (?) tour of flavours. How?

We hired a Battery Rickshaw (going by car is almost impossible) from near Ajmeri Gate to be dropped at Chawri Bazar. These rickshaw drivers, mostly teenagers or so, can beat the hell out of James Bond with their driving skills. They would advise you to not to let your any body part be outside the rickshaw, that’s it. They can manoeuver the damn thing with the narrowest of distance from any vehicle (mostly another rickshaw) with a gap as less as two inches. No one collides though. You must have a heart to enjoy the ride. I enjoyed it. Soon we were dropped near Shyam Sweets and just short of it, was our first halt. 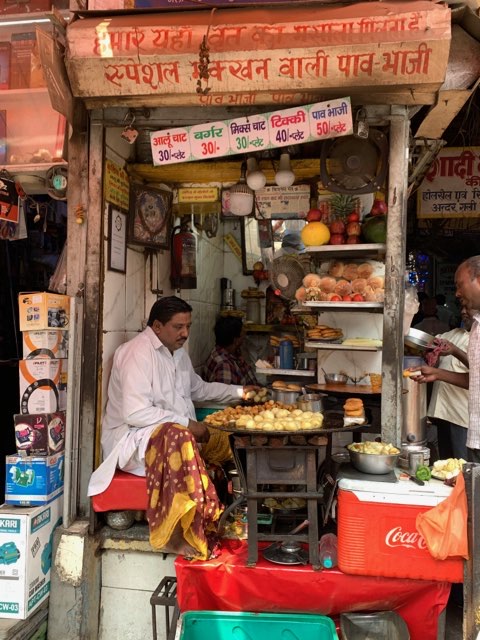 You blink and miss it. This unassuming small Hole-In-The-Wall outlet has much to offer. Their claim to fame is Kulle Ki Chaat or Kuliya Ki Chaat. The term Kulla or Kuliya is a short form of the earthen cup Kulhad. The third generation owner, Ram Babu Kushwaha, proudly stakes claim that he created this unique Chaat around 20 years ago. Quite natural that we had to try that.

Kulle Ki Chaat is made with about 8 pieces of Fruits and Veggies. Normally, Potato, Melon, Cucumber, Tomato, Orange, Apple etc are used. He skillfully scooped out the center portion out of each piece, leaving a depression in the center (hence the word Kulle) and arranged them in a paper plate. Then boiled chickpeas were filled in those depressions. Then a generous amount of Masala is sprinkled followed by lemon juice. Before handing over, each piece is generously topped up with pomegranate seeds.

The site of the plate is divine. It’s a play of colours in the plate. Each piece is a unique fruit or a vegetable, suitably decked up. Pick up any one piece and pop it as it is in your mouth. Ooooh !! A load of flavours will burst on your palate. The texture is of various degrees of crunch and mild softness. The sweetness and tanginess of fruits, the freshness of flavours veggies, the tanginess of Masala combined with sourness of lemon juice is a deadly symphony of textures and flavours. Struck by the storm of flavours, this also plateful also acted as appetizer. So, we walked back towards  Chowk Hauz Qazi, for our next stop. 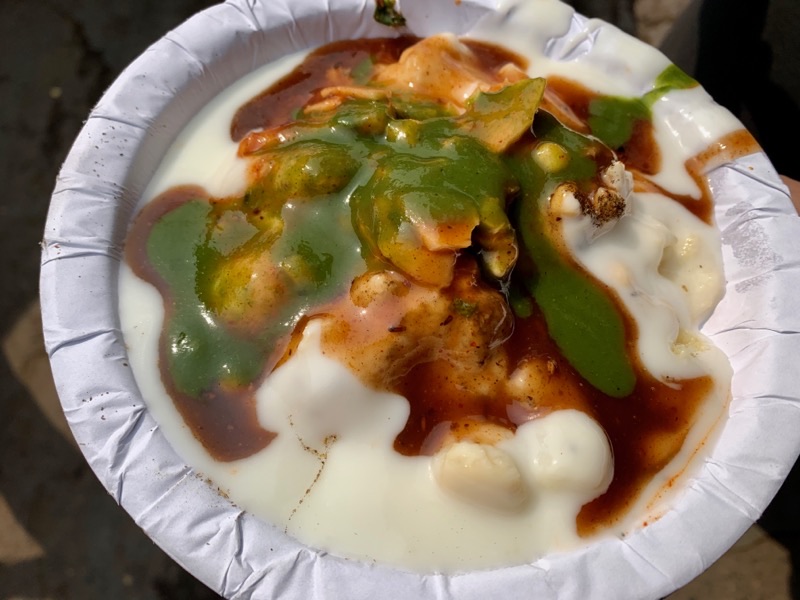 Again a small outlet but located at a vintage point. It’s the first shop on the left when you enter the Chawri Bazar road from the Chowk Hauz Qazi. You can’t miss it as you would see a crowd grouped in front of it. By now we had recovered from the storm of flavours so wanted to try something chilling and soothing. So, it was Dahi Bhalla. A plate two Moong Dal Vada drowned in Dahi (curd), topped up with Green and Red Chutneys, sprinkled with some Masala and garnished with Pickled Kachalu (Colocasia root) came out way, rather quickly. The very sight was quite attractive. The Bhalla was quite soft and tasty. The curd was cold and sweet which was balancing the tanginess and sweetness of Masala and the Chutneys. The intermittent bite of pickle was a cherry on the cake. Again a very refreshing encounter.

Now standing on this shop, look diagonally left and you would see a wonder. 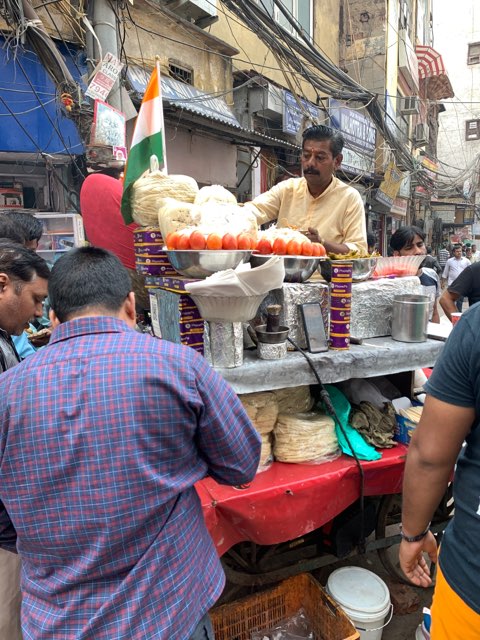 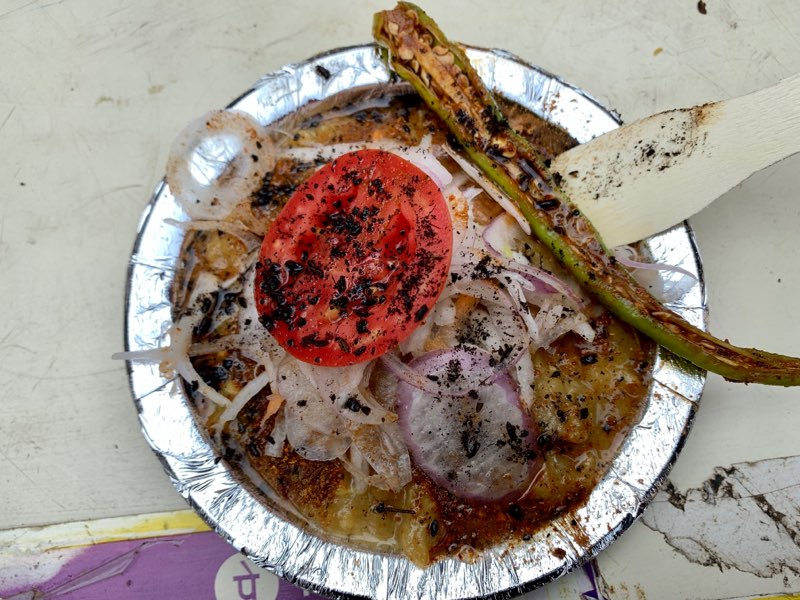 A guy with huge brass vessel would be comfortably perched up on a push cart and a swarm of people enjoying their grub beneath. You can’t miss this one. We ordered our share and in no time, a couple of Kulchas with a beautiful looking bowl of Matar (Chickpeas) were served to us. I kept on admiring the beauty in that paper bowl. A goldenish yellow thick puddle of Chickpeas covered with sliced onions, garnished with a slice of red tomato and a green chilli, having a sprinkling of dark masala was a beautiful sight. One spoonful on the palate and it told me, it was a delight. The thick slurry of Chickpeas was wonderful. Each grain was intact though and yet was a melt in mouth along with its so called gravy. The masala coupled with a dash of lime juice gave that flavourful edge to the whole thing. Spoon after spoon, it was a magic. I ditched the Kulcha although it appeared to be good.

Having encountered yet another storm of flavours, it was time to ‘travel’ to our next stop. So, once again it was time to have a thrilling rickshaw ride with those youngsters on the driving seats. This time it was a bit longer. We had to bear the dangerous maneuvering skills amongst a sea of people, rickshaws, cycles, scooters, shouting (no one uses horn; just a call to get aside) and the scorching heat of the afternoon. We were dropped at Fatehpuri Masjid. So walking past the Masjid which was on our left, we reached our next stop.

We were made to sit inside which had quite a few tables already taken. Found a table just under a fan and made ourselves comfortable. Our order was pre decided; Chawal Chhole Palak and Chhole Bhature. We instructed that the Chawal be served in their tradition style. 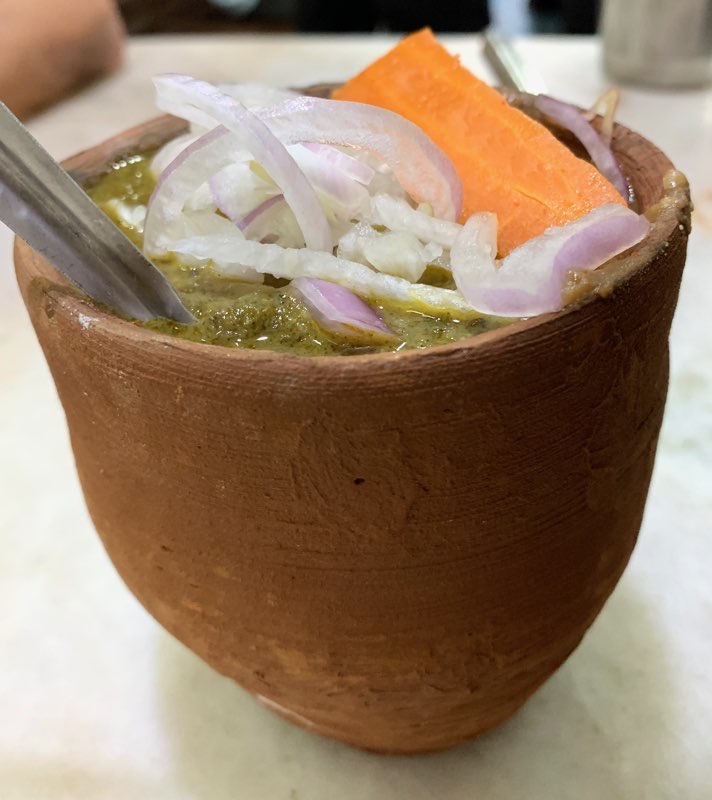 Soon a Kulhad (earthen Cup) came topped with a slice of Carrot sitting atop a mount of sliced onions. This was our Chawal Chhole Palak. With the help of a spoon, when I 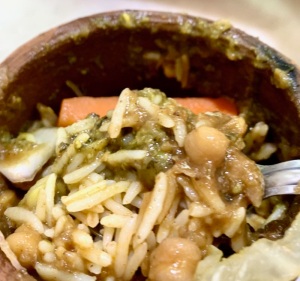 cleared the onions, beneath was a heap of Rice playing hide and seek with Chhole and a sort of purée of Palak (spinach). A spoonful in the mouth and it was a class apart. Flavourful rice with Chhole and Palak, aptly moist and spiced was a symphony unfolding. Take a bite of the pickled carrot and it’s an add on. Eating out of Kulhad itself is exciting and when you get a flavourful combo, it’s an icing over the cake.

The Bhature Chhole arrived and once again I was delighted.  The Bhatura was that flat bread type. The one which is heated on a tawa (griddle) before serving. It was soft, rustic and fresh. Chhole took me to my childhood. A concoction done in basic spices and almost no oil. Again, adding of sliced onions and a pickled carrot was a top up bonus. What a lunch !

By this time, we were full. But then, one has to wrap up with a dessert. So, we walked back towards the Masjid. 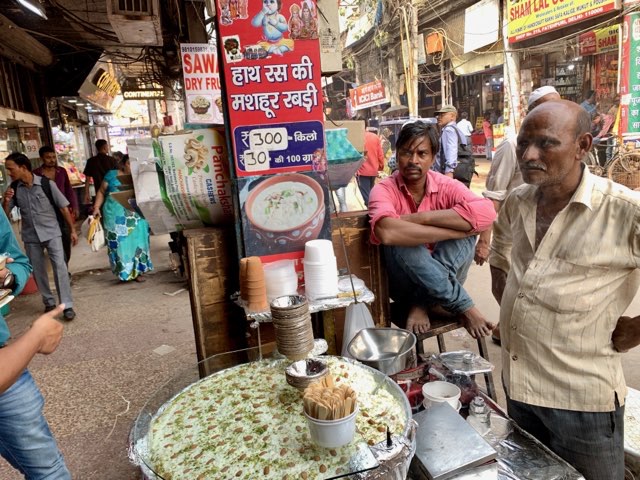 Just short of the Masjid, in the corridors you would see four vendors sitting with their beautiful looking ware. They were selling Rabri. We stopped where two of them were sitting side by side. There was a small signboard above each, declaring Hathras Ki Mashoor Rabri. 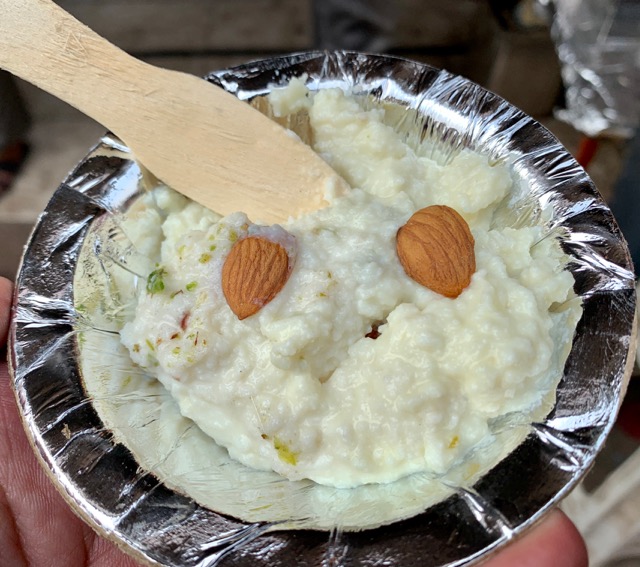 We ordered our share. About 100 grams was served to us in a paper bowl with a farnishing of two almonds. This pale coloured Rabri was pure thickened milk, mildly sweetened which had a hint of Cardamom and Almonds. Then consistency was creamy and was not overly sweet. A perfect wrap up of the food exploration.

And, then again a daring ride on the rickshaw back to our car parked at the Metro Station.

So, once again, the Chandni Chowk food delighted me where I ate a Kulhad (Kulle Ki Chaat) and ate out of a Kulhad (at Gole Hatti) and quite a few other delights. If you know of such gems, do let me know. Till then…

Links to my other stories on Food in Chandni Chowk :

Early Morning Breeze And The Flavours Galore In Chandni Chowk

A few weeks ago, I had my lunch at this iconic place.
Rainy Weather + Nostalgia = Depaul’s Cold Coffee 😊. The drizzle outside and the droplets on the bottle completed the story.
Rajesh Tara In Conversation With Food Researcher & Celebrity Chef, @osamajalali, on Friday, 30th July 2021 at 7.00 pm.
सुबह 10 बजे कौन गोलगप्पे / दही भल्ला खाता है ?
#WeekendCooking in #MyKitchen:
No description needed….the colour of #Chai, the bubbles and the freshness says it all 😊