You would take some time to remember this name (if you are not from south). Once registered, this would keep on playing in your mind like a track in loop. “This is a Mallu joint, quite popular here”, told my local acquaintance in Chennai. Last week, I had lunch there. The fare on the table included Absolute Kandhari to drink, Mutton Pepper Roast for starters, followed by Mango Fish Curry with Appams and then Mutton Puttu Biryani. The desserts included Cloud Pudding and Kandhari Ice Cream. Since then, the taste is lingering on, like the name, in my mind. For me, it was an experience which started with a Chilly and ended with a Chilly. Interesting?

This place was  strongly recommended this place by my friend and colleague KK, who hails from Kerala, worked in Chennai for long and now in Gurgaon. So, Kappa Chakka Kandhari was on my list for long. In Malayalam, Kappa is Tapioca, Chakka is Jackfruit and Kandhari is Birds Eye Chilly. All of these are used as staple in south and mostly in Malayalam cuisine. The menu of the restaurant and the dishes are like introducing the traditional cuisine of various regions and communities of Kerala to the world, with a spin. The menu is the testimony that the Kerala food is not restricted to Appams & Stew or Fish & Rice or Malabar Parottas & Kurma or Biryani, only.

We ordered Absolute Kandhari to start with. A small tumbler filled with a Lime Soda type of liquid landed with a sole tiny Green Chilly (Kandhari) floating in it. That’s it ?  This won’t even quench the thirst. Picking up, I tried to get the aroma and it gave a whiff of sort of Tabasco, Green Chilly and Lemon with a bit of a fizz. First sip, and the fizz with sharpness of chilly swiftly traveled through the palate and the nostrils. Opened up all the pores and windows of mine, as if I had a shot of Wasabi or Kasundi (mustard sauce). The first sip itself, simply blew me away. Now one could realise why this was a small wonder. But then, quite an interesting concoction. The menu says that besides Lemon and Kandhari Chilly,  it also contains some of the secret spices. Frankly, I couldn’t make out what those were, despite best efforts. I could get closer to smelling vinegar and yet not sure. While I enjoyed sipping it and did finish it, my other two friends gave up mid way.

Having my taste buds activated completely, was delighted to set my eyes on the plate of Mutton Pepper Roast which arrived next. Dark coloured chunks of dry roast Mutton done in black pepper and onions sat in a white plate. The dish gave out an inviting aroma mix of spices and meat. The first morsel of the meat on the palate told me it was flavourful, had a punch of pepper and the meat was soft and succulent. Enjoying this was an absolute delight. A few drops of lemon juice on it would have certainly enhanced the taste but I restricted myself due to my bad throat. Manmohan, my colleague,  said that he had never tasted such a great Mutton dish and kept remembering it many times over.

We were now ready for the mains.

Next on the line was our order of Mango Fish Curry with Appams. This saffron coloured curry with slices of green mango, curry leaves and fish peeping out was very

attractive to look at. A quick first spoonful of the thick gravy and it was mildly spicy which had a balanced flavour of the tang of the raw mango with a hint of sweetness. The coconut milk provided the base to the gravy and balance to the spices. The fish slices were soft like silk, coated with flavours. The mango slices again were soft and flavours had seeped in till the last green skin. Went very well with the fluffy Appams.

Then came in the much awaited Mutton Puttu Biryani. Had altogether a different look than a Biryani. Subramanian, my another colleague, a vegetarian, explained me that Puttu is a breakfast staple in Southern India, particularly Kerala. Steamed cylinders of Rice Flour with Grated Coconut, and not rice grains, serve as the main ingredient and the dish has sweet or savory fillings of you choice. Ours had Mutton. The almost bland base of rice flour blended with nuttiness of coconut gave a varied texture and taste. Served hot, the filling of dry Mutton Curry was a refreshing and flavourful blend to the whole dish. The powdered base when taken with chunks of mutton coated with spices, gives you a unique taste. The looks of this Biryani would impress you and the subtleness would tickle the taste buds. I didn’t need any accompaniments with this. Another interesting version of Biryani.

Now was the turn for our desserts.

Firstly, the Cloud Pudding. An almost dancing mound, having a glaze all over,  sitting in a chair-like dish, arrived in style. This mildly sweet pudding has predominant flavours of Coconut Pulp and Coconut Water with which it is made.  It also had a hint of caramelised milk and I guess Agar Agar is used to set it. It is so light and fluffy. Spoon after spoon you would try to understand it and yet it would melt in mouth before you get anywhere. Seems like a simple and yet a complex dish. A great dish which is surprise in itself and should be a must if you dine there.

The next was Kandhari Ice Cream. A normal looking pale coloured ice cream scoop sat in the cup, waiting to be enjoyed. I took the first spoon and the flavours of aptly sweetened  ice cream hit my taste buds. But then there was this hint of the aroma of Chilly and then suddenly a mild heat of chilly strikes, gradually. It was a wonder for you don’t see any traces of the chilly in the ice cream. You taste the ice cream whose taste lingers and then the chilly comes in which also lingers on. A sweet and sharp wonder. 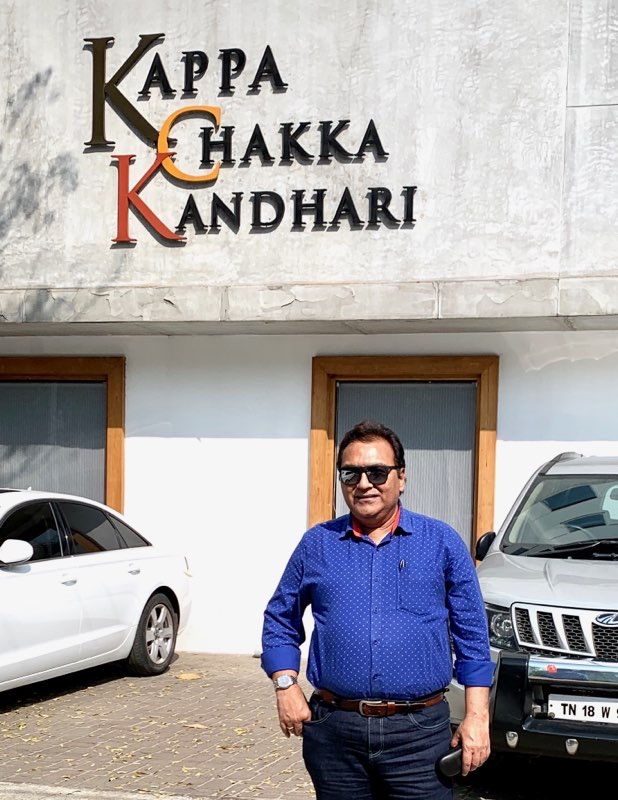 I must go there again, may be quite a few times because the place has many dishes to offer and each had a great description. What has been your experience there (or in Bangalore as they have opened up there as well), do let me know. Till then….