When one talks or even thinks of Assam, two things one instantly relates with the state….Tea and the famous Kamakhya Devi Temple.  I have tasted the local tea every time I go there (though not a great tea lover) and yes, once have paid my obeisance at the temple too. Now besides the above two recalls, that is the tea and the temple, let me draw your attention to one more vital recalls of any place you go. You guessed it right – it’s the local Cuisine of that state or city or the locality.

To me, that is usually the first recall about any place.  So, Guwahati is no exception.  Let me confess that I love the food there, particularly the fish recipes, the variety of the meat they consume and the basic construct of the cuisine. That’s the reason, when there, I would always want to visit Parampara, a restaurant closer to our workplace to have local Thali. Actually, a Thali lets you have a peep into the cuisine and the flavours in one shot because you get variety and the portions of each dish are not very large.

Assamese cuisine is based on three basic ingredients which are available in abundance there. A meal would essentially consist of green vegetables, fish and rice.  Additionally, a variety of meat such as lamb or goat, chicken, pork, pigeon and duck, besides some more.  Then there are few terms which one comes across while talking of Assamese food such as, Khar, Xaak and Tenga. Khar is basically an alkaline dish prepared with raw papaya or raw banana, mustard leaves and sometimes pulses are also used. Also contains soda bicarbonate. It is eaten with rice and is known to cleanse your stomach.  It is also said that Khar is very good for strength and beauty of hair. Xaak meaning green leafy vegetables is also an important part of the Assamese meal.  During festivals, around hundred different varieties of green vegetables are eaten all over.  The food would also normally have a Dal, Aloo Pitika, a mildly flavoured mashed potatoes prepared with ginger, onions and green chillies, and Masor Tenga.

A meal would typically start with Khar and shall end with the Signature dish called Masor Tenga, a Fish Curry which has a tangy taste, basically acidic in nature.  The curry is runny with water like consistency and is cooked with tomatoes, lime juice, turmeric, coriander, spices and Thekera (dried mangosteen).

Mind it, each dish will have a pungent flavour or aroma of mustard.  I like mustard so is a welcome thing for me.

Coming back to from where I started, I would usually go to Paradise Restaurant which houses an outlet Parampara. The place is near our office and serves Thali. It has acquired the name of Parampara Thali and is an impressive fare served in a bell metal wares. The spread consists of Khar, two types of Dal, Green Vegetables, Tenga Fish, Mutton Curry, Aloo Pitika and lemon with Cillies on the side, a sweet dish and an unlimited supply of rice.  Sorry, no chapattis.  I would always order an extra serving of Masor Tenga or the Tenga Fish Curry.  The fish is very flavourful and soft, tastes  of mustard and lime.  The runny curry is light and goes very well with the steamed rice. You can’t get that combination of tangy, fishy  flavours anywhere else. I love it so much that at times, I would skip the Thali and would order only Rice and Tenga fish. No words, I feel, can do justice to the dish. One has to experience it, if you like fish.   Well, the food at Parampara is not expensive and yet very delicious.  And I am told that the outlet is quite favourite with the locals.

Then one day I was told that at a short distance ahead of Paradise, there is another place called Khorikaa which serves equally good food and that too is very authentic.  Khorika in Assamese means Barbequed Fish. Sounded very attractive so decided to pay a visit next time.

This week, when I was there, after finishing our work, four of us went to Khorikaa.  Naturally, our basic order consisted of Thali for each one of us. Had heard so much about the other meat preparations in Assam, that despite resistance from one of us, went ahead and ordered Fried Pigeon Dry and Fried Duck Dry. 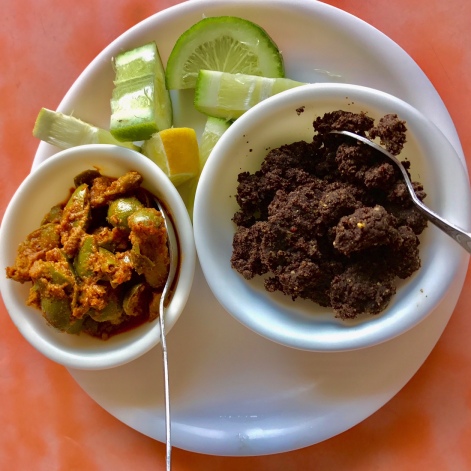 The amazing condiments go very well with the food

We were hungry and the order was taking time to come.  Sensing our restlessness, after a wait of about ten minutes, the server brought us two bowls full of some condiments which we were not able to recognise.  One contained a dark chocolaty brown moist powder and the other had some bright green berries coated with yellowish pickle like Masala.  We got busy in that instantly.  I took a small bit of dark Masala on the tip of the spoon and tasted…..a blast of salty, tangy mustard hit my palate.  Ooooh, so flavourful.  Rest of the lot was looking at my face with curiosity. Then was the turn of those berries cut in half.  One Berry, when tasted, initially gave a taste of a fresh pickled gourd but then the taste of the berry exploded onto you palate.  A strong tangy flavour coupled with sourness was tickling your taste buds.  The sourness was sharp yet tasty.  Had to signal the guy at the desk to ask about these.  We were informed, the dark one was pure mustard seeds, roasted and ground with salt and pepper and the green thing was local olives in mustard paste.  By now, we could very well make out what to expect from the food that’s going to come.

Then the Thalis came and conquered !!

The Khar dish, two Dals, green leafy vegetable, another vegetable dish with potatoes and peas, a tangy curry dish with a kofta (known as Bor-a fried ball of mashed lentil or gram in a curry other dip), Pitika, a sweet dish, and Rice.  That’s it ?  We gave a weired look to the server. He smiled and then another server appeared carrying our individual servings of Masor Tenga, the signature dish.  Along with it came the two celeb dishes, the Pigeon and the Duck.  Wow !!! It surely appeared that we were in for a great experience. We were about to start but then a plate having three smoked fish like things was placed before us. Ola !!  This is Khorikaa, the barbequed fish and was complementary for us.

The Thali was as flavourful as my earlier experience in Parampara.  Describing the dishes would be a repetition of the above. So please take it that it is given that each dish was amazing. Khar to Tenga was a satisfying and flavourful journey, as expected.   The experience now needs to detailed about Khorikaa and the two celeb dishes. 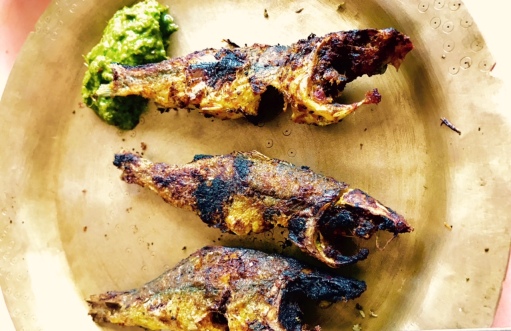 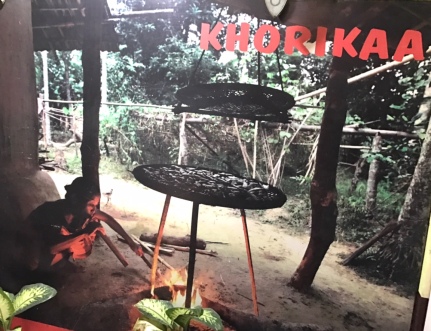 The smoked fish, small in size had aromas of mild roasted spices coupled with the smoke. The meat was slightly less but the flavours were refreshing and leaves you asking for more. It served as a perfect appetiser.

The two other dishes, pigeon and the duck, appeared to have been prepared in somewhat closer to Chinese style which had a glaze of oil, and a variety of colour.  Darkish meat (may be with use of soya sauce) sat there with sautéed onions, green chillies and beans.  Both dishes looked the same , however, a closer look distinguished the meats.  The small morsels lookalike of Mutton was the pigeon meat and the meat with traces of meshed skin on it was the duck meat. Though both the dishes looked the same but were very delicious and fresh.

The Dry Pigeon Fry (left) and The Dry Duck Fry

The pigeon meat had chicken like but very small and delicate bones.  The meat was very soft, juicy and flavourful. It is advisable to chew the meat along with the bones which makes it even more tasty.  The duck meat, contrary to my expectation (have eaten pecking duck which is relatively dry and has a slightly rubbery texture) was quite juicy and tasty.  Was not at all chewy.  The meat had a mild salty flavour and had less of bones.  As compared to the pigeon, duck meat had more of body.  While the masala in which the dishes were prepared was almost the same, the meat in both tasted distinctly and quite unique.

In both the preparations (I assume both were prepared in the same way) the masala of beans, chillies and the onions provided a very fresh taste to the dish.  One could even eat the rice with that masala even without the meats. Seeing our indulgence and continuous praise, one of us who was initially hesitant to try, got encouraged and grabbed a helping of pigeon and duck.  The instant reaction of enjoyment was evident and in his words, he is sold now.  The first time for him was the beginning of a relation with the delicacies. For me too, Khorika needs to be explored more and need to experience some more dishes offered by them.

Overall, it was an amazing experience and the flavours are still fresh in the mind.  Our good experience did not end with the meal only.  The bill for this elaborate fare too was very pocket friendly, in fact unbelievably low.

Before closing, a tip for those who want to try this cuisine.  I am told (haven’t tried yet) that Parampara Thali is also available in Assam Bhawan in Delhi as Paradise has an outlet there too.