During our weeklong holidays in two states of Malaysia, Langkawi and Kuala Lumpur, we ate quite a few meals.  It was Indian to Chinese to Continental to Malaysian to Fast Food. However, there’s one dish which caught my fancy.  I came across this dish called Nasi Lemak at every possible opportunity. You find it on the road side and you find it in a 5 Star hotel. You can eat it for Breakfast, Brunch, Dinner, Mid Meal or otherwise. You can have a basic version and you can have various condiments to go along with it. It is a poor man’s food and it is rich man’s food too. It’s healthy yet, relatively, fatty in nature.

It’s synonym with Malaysia and is known as its national dish. I tried it on the first available opportunity and was floored with its simple complexity ! Confused ? Let me explain.

Nasi Lemak is a Malay fragrant rice dish cooked in coconut milk and Pandan (screw pine) leaf. It is commonly found in Malaysia.  The resultant dish is a heap of rice which resembles the boiled rice or steamed rice. The word Nasi means Cooked Rice while Lemak means fat or fatty in nature ( due to usage of coconut milk).

I have had three versions of this wonderful dish.

My first version was at a local roadside eatery. There it was served with just a red curry. Curry, by the way, in Malay language is called Sambal. It was a simple reddish paste having a tangy, spicy, salty and sweet flavours. I was told that the basic paste consists some Coconut Milk, Shallots, Ginger, Garlic, Tamarind, Red Chilli, Salt and Sugar. The rice had a bite yet it was soft and flavourful. Each grain was separate yet aptly moist and delicately flavoured. The subtle fragrance of Pandan Leaf combined with nutty flavour and smoothness if coconut milk gives it a delicate texture and flavour. A spoonful of the red curry gives you a balance of strong and delicate flavours. When you combine both the rice and the curry, you get a bouquet of strong and delicate flavours.  So, my first encounter with the dish was quite encouraging and I was ready for the next level. 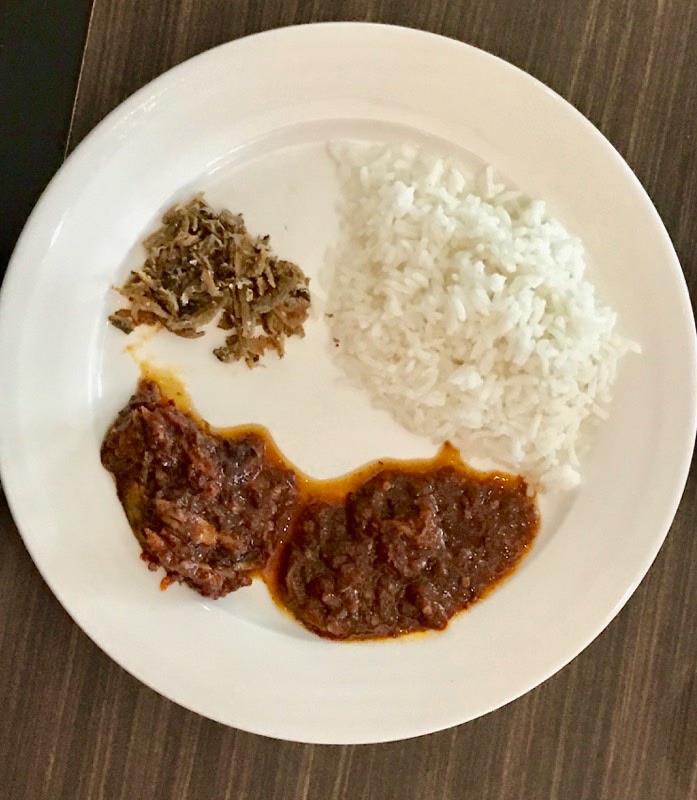 My second version came at another, slightly better restaurant. Here it was served with two Sambals (curries). One was made with Anchovies (which is commonly used sambal here) and the other one with Squids. 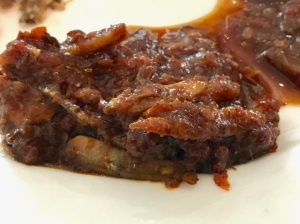 Anchovy is a small sea fish which has a very strong salty flavour. These are dried and used in sambal or even otherwise is eaten as a snack. Coming to the sambal, this one is known as Sambal Ikan Bilis (Anchovies). This Sambal was prepared in oil, onions, soya sauce, tamarind paste and sugar. A curry which is high on sea food fragrance and salt. However, once mixed with Nasi, the flavoured rice, it is an amazing food.  The strong flavours and aroma of sea food when combined with the delicate rice, it is an amazing experience. Very satisfying and flavourful. 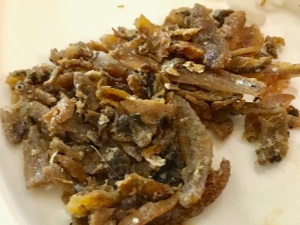 I was also served some dried Anchovies along with it. These small sized dried fish were perhaps first stored in a solution of salt and water and then dried. High on salt yet very crispy and flavourful. Had a whiff of sea which was quite amusing.

Then was the time to try it with the Sambal Sotong (Squids). The basic recipe and the flavours of the curry, more or less remained the same while you got an alternate texture, bite and flavour of Squids. This one was relatively low on salt and high on chilli. Again, it takes the level of Nasi to another level. Taste the curry on its own and then with rice and then again and again. This is what I kept on doing.

The One With Condiments

My version three of the dish came when I found that it was being served in breakfast in the hotel I was staying. The dish was presented here in its full glory. A small card placed next to the layout explained the dish and the list of condiments it was being served. Yes, the Sambal Ikan Bilis and Sambal Sotong were also there. Then there was this array of condiments such as, Dried Anchovies, Fried Peanuts, Sliced Cucumber and Boiled Eggs. First, all this appeared cosmetic layout but then I realised, it’s part of tradition and right way to enjoy Nasi Lemak.

I had to try this for sure. My process remained the same. Try the rice first on its own. Yes, same flavours and aroma. Then the Sambals of Anchovies and Squid versions, one by one. Same punch of Tanginess, Salt, Spice and Sweetness. Then dividing the heap of rice in two portions and mixing it with different Sambals. Ah !! Same flavourful punches. Then I started ,intermittently, adding the condiments one by one. To my amazement, each of the condiments like eggs or peanuts and others not only balanced the flavours on the palate, perhaps it also acted as a palate cleanser making it ready for you next spoonful. I couldn’t ever imagine what the condiments could do to the dish. 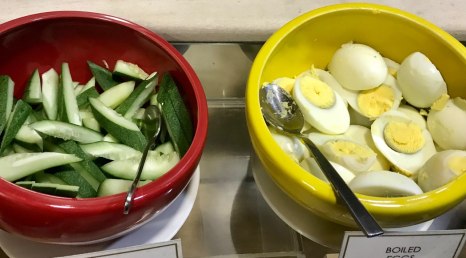 I am sold to this national dish of Malaysia in all its avatars.

I also tried to combine the basic veggie version of Sambal with Nasi Goreng (fried rice which has pieces of meat and veggies). It was just ok but nowhere near the combo of Nasi Lemak with Sambals.

During my stay of about a week in Langkawi and Kuala Lumpur, I have eaten at a few places. One thing I found very amusing, particularly in Langkawi. Almost every restaurant would have an elaborate buffet laid out. You have three choices. One, go for the veg or non veg buffet and pay for it. Two, pick up one serving of the dishes of your choice from the buffet and you will be charged for those dishes only. Alternatively, one can go for the Ala Carte choice from the menu which may have only few more dishes, besides the buffet. We, a family of four, paid as less as 25 RM and as high as 165 RM for our various meals depending upon the level of the eatery.

A glimpse of few of my other food experiences in some shots. 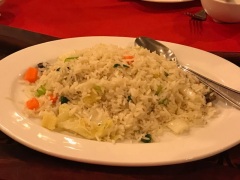 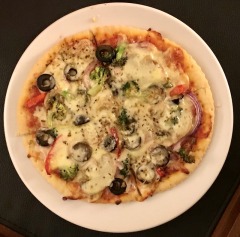 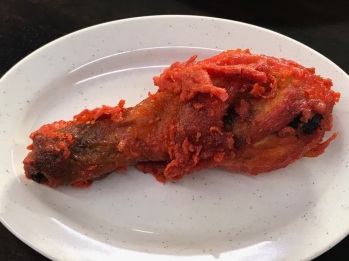 Malaysia is a foodies (non-veg and sea food) heaven and is not very expensive to enjoy the offerings. What have been your experiences there? Would be happy to know. Till then…