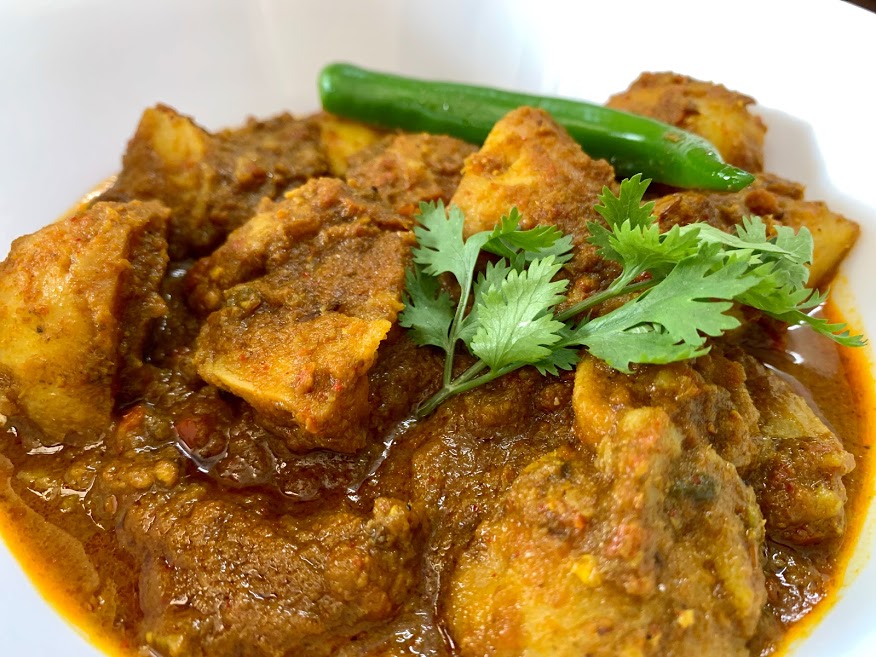 This green, leafy, aromatic herb called Dhania in Hindi and Coriander in English, is also known as Chinese Parsley or Cilantro in America. In Indian cooking, particularly in North, it is an essential part of every Dal or Curry preparation. While I have been also using it in whole, powdered or leafy forms during my intermittent plays in the kitchen, however, my real love for this herb grew accidentally. And since then I am hooked. So far, I have had Dhania or Coriander as the main flavouring agent in a Main Course Vegetarian Dish, in an Appetiser or a Starter Non-Vegetarian Snack and quite a few others. How?

It so happened that I am a member of a lovely Food Group called, Spicetrailz, on Facebook. The group is run by my friends Anilraj Kapur and Uma Isabel. A few weeks ago, they mooted this idea of launching a series called, Kitchens Of India. The series was to include traditional, slightly unknown recipes of various household kitchens across the country (by the way it is already in its second avatar and is currently live).  I was commissioned by my friends to be featured as part of the series. My first choice was to make our family favourite, the humble Dhania Aloo!!

The recipe video did feature on the group and carried the following post:

One of our most loveable member Rajesh Tara, a Corporate honcho, but a foodie at heart, his profession makes him travel a lot n he never leaves an opportunity to explore n try local food wherever he visits… today he is making Dhaniya Aalu his mother’s recipe very Flavorful n tempting

The above video elicited quite an interest in the recipe. I was overwhelmed to see quite a few of my friends replicating it. While one could find this easy yet flavourful and refreshingly flavourful recipe in the Video link above, I reproduce it here for the benefit of the readers:

Step 1: Take a cup full of chopped Coriander Leaves, peeled and chopped one Garlic, 3-4 Green Chillies chopped and one-inch piece of Ginger. Grind them in a grinder and make a paste. If needed, add a little water so that the consistency of the paste is like a puree.

Step 3: Wash and boil 3-4 medium sized Potatoes. Once done, peel them and cut in quarter sizes and keep aside.

Heat oil in a pan and shallow fry the Potatoes. Once the edges become crisp and golden brown, take out and keep aside.

Once the masala is done and it starts releasing oil on the sides, add the fried pieces of Potatoes. Mix it well and let it simmer for few minutes so that the potatoes absorb the spices and the masala flavours.

Close the flame and garnish with Coriander leaves or a Green Chilli. The dish would have a slightly thick gravy and could be enjoyed with Poori or Parantha. However, if you want a slightly runny gravy, you may add water after putting the Potatoes and then put it on simmer.

The overwhelming flavours and freshness of Coriander would delight you.

The quintessential Aloo in the Dhania flavoured sauce or gravy gave me an idea of doing a non-vegetarian snack with it. So, I did this Dhania Chicken dry or Hara Bhara Murg which had a predominant flavour, of course of Dhania. The outcome was a soft and succulent greeny morsels of chicken which had a sharp and refreshing flavours.

As the first essential step, prepare the Green Paste (as for Dhania Aloo above).

Take 500 Gms of Boneless Chicken, wash it and pat dry. It is very important that the meat must be dried.

Once the entire water gets drained out and the chicken is dry, marinated it in the Coriander paste, along with two tablespoons of Curd.  Cover it and keep in the fridge for atleast six hours.

In a Cauldron (Kadhai), transfer the marinated Chicken along with the entire marinade. Initially, cook it over high flame and once the chicken starts turning its colour, lower the flame and keep on stirring.  The chicken would start cooking in its own juices. Put a dash of water, cover and let it simmer for about 10 minutes, however, keep an eye on it.

Remove the lid and check. The chicken would have cooked by now. Finish it with a dash of Ghee or Homemade Malai or Fresh Cream. Mix it with a light hand. This will bring a glaze on the morsels and will enhance the refreshing aroma of the herb. Garnish it with chopped Coriander leaves, sprinkle some lemon juice over it and enjoy this flavourful snack.

If you want, you could experiment further by adding spices, or flavours of your choice such as Black Pepper or Kasoori Methi or Chat Masala but please ensure that it does not overpower the aroma and the flavour of our beloved Dhania.

The humble Dhania or the Coriander which has always been used as a garnish or a finishing element, could also play a lead role in flavouring the dish. The is a refreshing twist. Try these easy recipes in your kitchen and if you have some more such interesting family recipes, do write to me. Till then…

0 comments on “My Tryst With The Humble Dhania; Oops Parsley !!”