I was in these two Southern cities last week. Which meant five meals over two days. So, here’s my food story of this week.

There are many outlets in the city of this Madurai based chain. We went to the Nanganallur one, close to the Chennai Airport. A very basic place, though air conditioned. As soon as you settle, Banana Leaves are spread in front of you. These are your plates. You sprinkle few drops of water to wipe them clean. Don’t expect spoons to be given.

Our order consisted of Ghee Podi Idli (I settled for one piece), Vada and a Masala Dosa (shared between two of us).

First, we were served two Chutneys, the usual Coconut Chutney and Onion Chutney. Then, in a steel serving plate came out Ghee Podi Idli laden with dark reddish Podi Masala and Ghee. The server used his hands to mop up the masala in the plate to transfer your Idlis to your banana leaf. Then came in the goldenish yellow Vada. 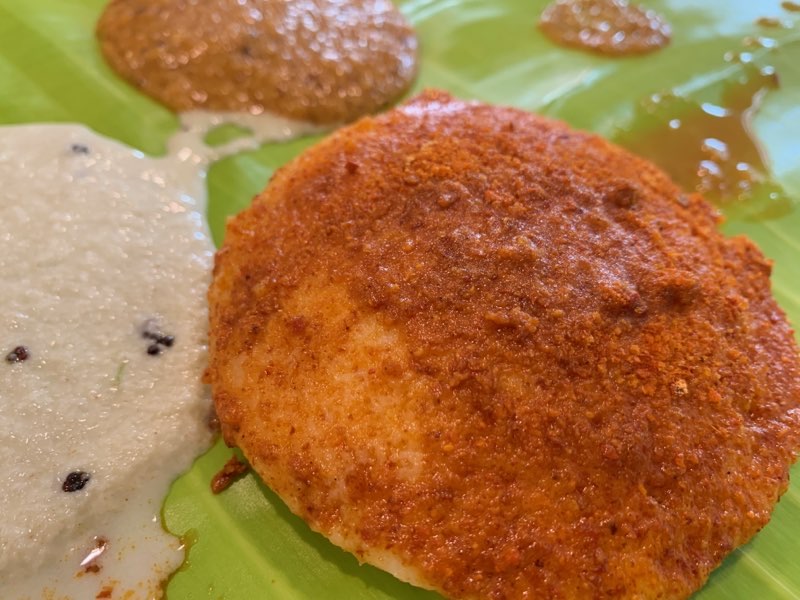 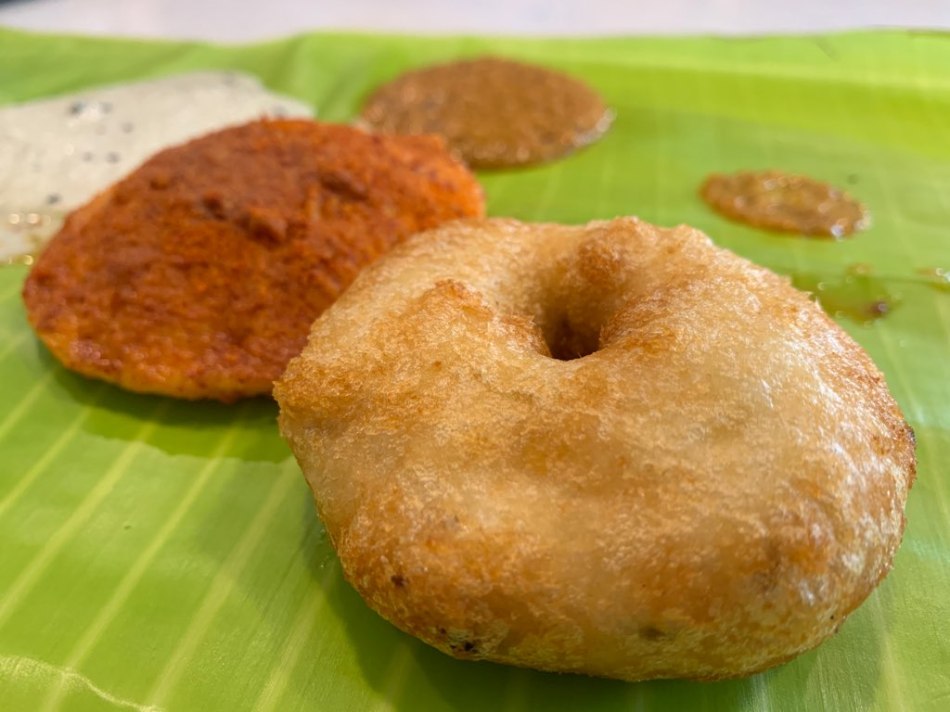 This was one of the best Vada I would have eaten so far. The crust, though crispy, wasn’t thick. The inside was super soft yet a bit granular. It melted in your mouth like silk, leaving you asking for more.

The Idli was again one of the best. Super soft (your thumb and index finger would meet if you carry it between the two). The Podi Masala along with Ghee did wonders to the taste and the texture. 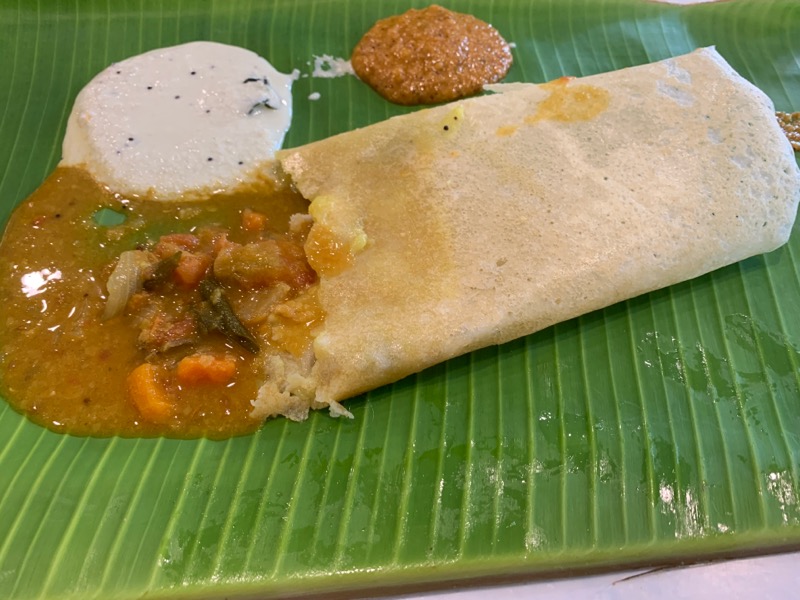 The Masala Dosa, was not crispy though. The filling of mashed potatoes was seasoned with basic spices. Not bad for a taste. It is served with a flavourful Sambar, full of veggies. Again no bowl for Sambar. It is poured over the leaf. You mop up the sambar and the chutney to eat it. quite an experience.

All these items went very well with the Chutneys. I liked the Onion Chutney the most. 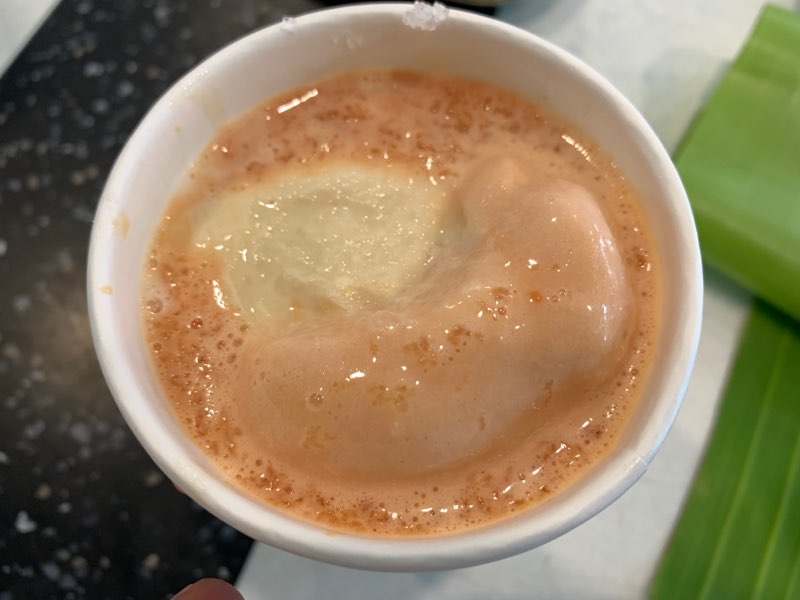 For a change, I ditched the Filter Coffee and ordered their speciality Cool Drink, Jigarthanda. It was a chilled concoction of Milk, Ice Cream and Javarishi (Sago or

Sabudana). Perhaps had added flavour of vanila and almonds. This, true to its name, was in fact Jigarthanda (providing cooling effect to your body). This drink cant be explained in words. One has to experience it. I would say, this is one of the best Cold concoctions I have ever tasted. For me, this was the highlight of the meal here.

The legend has it that this Biryani was started by one Nagasamy Naidu in 1957 in a place called Dindigul in Tamil Nadu. Since he used to wear a typical Thalappa (a headgear), he soon became Thalappakatti Naidu as the popularity of his Biryani grew. The recipe has been the same for the past 60 years and is based on meticulous selection of best quality meat and spices. 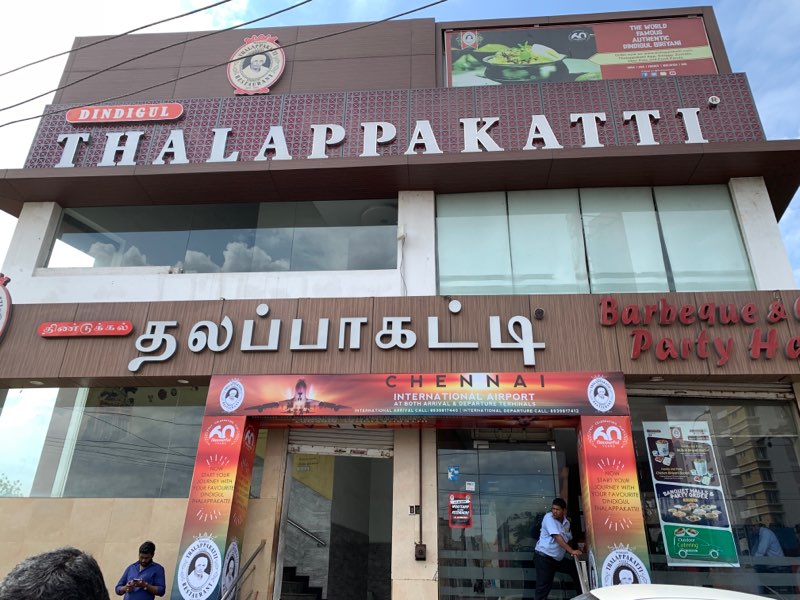 As soon as we sat down, the ritual of spreading Banana Leaves were repeated, albeit this time it was in a tray type of a plate. Again, no spoon.

Our order was simple. Five of us, had different choices for Biryani. So it was Mutton Biryani, Chicken Biryani, Egg Biryani, Veg Biryani and a Tawa Toast Meen (griddle roast fish). 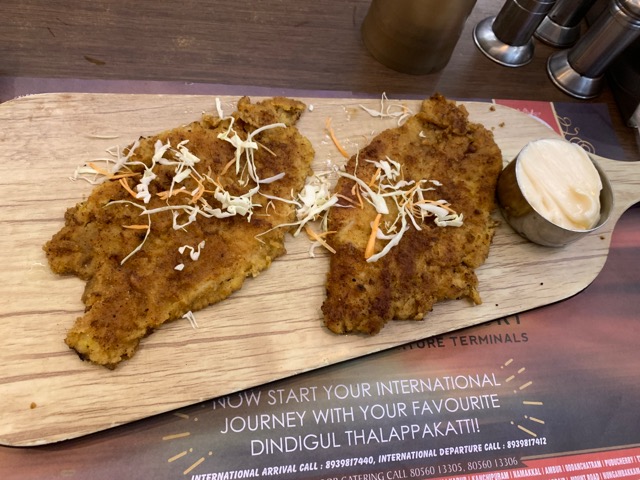 Two fillets of golden-brown Tawa Roast Meen (Sear Fish) came beautifully placed over a wooden platter along with a sort of tartar sauce. It gave an inviting aroma of sea. One couldn’t wait further.  On the palate, it was music for your taste buds. Dusted with a mild masala, the crust was crispy which immediately leads you to the silken soft meat. Before you realised, it disappears in the mouth, leaving you asking for more. A good starter.

While we were recovering from the taste of the fish, our Biryani arrived; peeping out of four steel vessels. 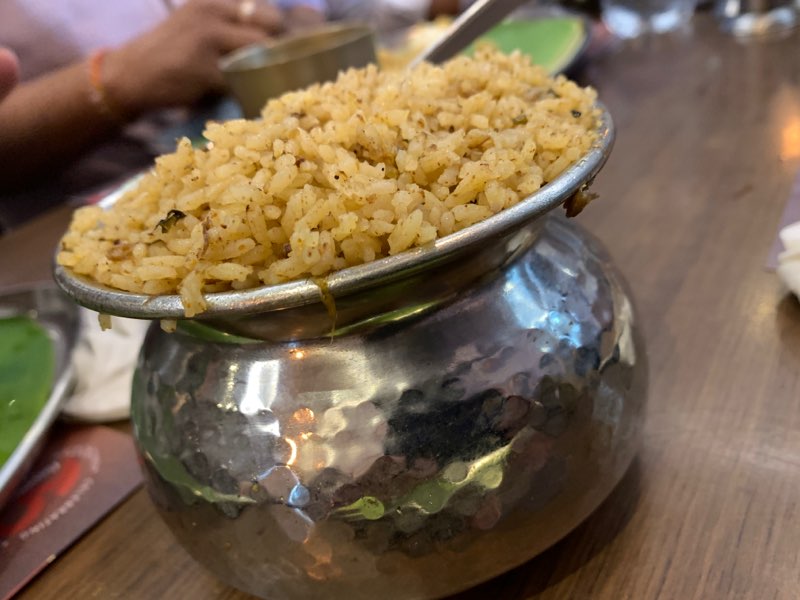 Transfering quickly a few spoons in my plate of Mutton Biryani gave out an amazing aroma. The rice used was small grain. There was no trace of spices yet it was full of flavours. It was aptly moist. Each grain though firm was conjoined with the other and melt in mouth sorts. The meat too had a flavourful marination and was tender to quite an extent. I did try the other versions and each had a unique flavour yet had the common stamp of Thalappakatti flavour.

The Onion Raita which came along with the Biryani was forgotten till one of us asked what was that. It was like a thick Onion Chutney made with curd. A spoonful of it told me that it was different and was again a marvel in itself. One could eat it without anything else.

Well, surely this Thalappakatti Biryani is the best Biryani I have eaten so far.

By the evening we went to Bangalore. 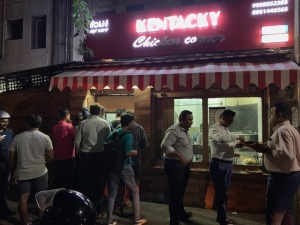 My local colleague took us to this small kiosk on Raja Ram Mohan Roy Road (Opposite ITC Gardenia). We landed there at around 11 pm and the outlet was full of people eating in cars, standing on the roadside, here and there. The place serves some non veg curries with fluffy Dosa. A plate comes almost half filled with Curry of your choice accompanied by two large dosas. 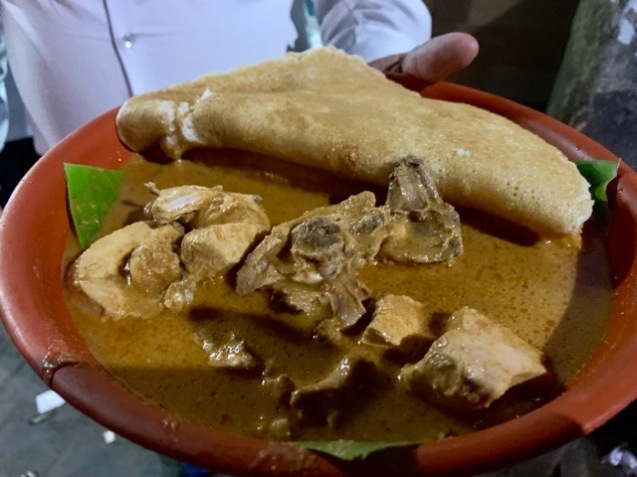 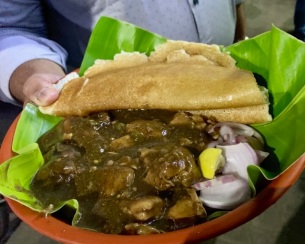 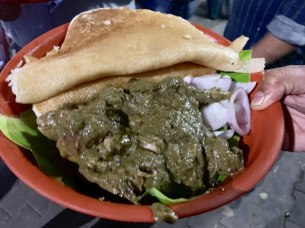 We ordered Chicken Curry, Chilli Chicken Curry and Mutton Gongura. The experience of eating those flavourful dishes with Dosa cannot be explained in words. One has to experience it. The meats were succulent and full of flavours. The curries were spicy yet a symphony of textures and flavours. The thick yet soft Dosa has a texture and mopping up the curry with it, gives an amazing flavor on your palate. A very satisfying dinner. I shall go back again whenever I could. 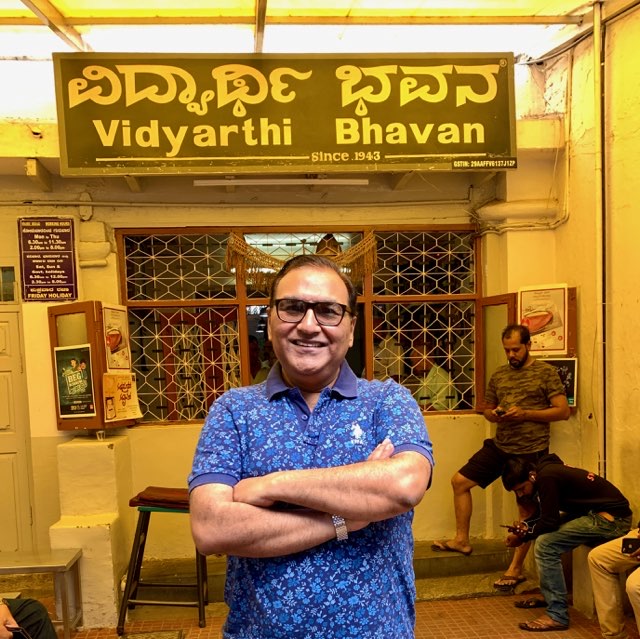 This is an iconic landmark of the city. Founded in 1943, the eatery was supposed to be catering to the students. However, its food was so good that people from all walks of life started thronging the place. We landed at around 8am and the pace was full with locals. A short wait of about 10 minutes and we were ushered in and made to sit on a table with an elderly couple sitting across. They said they were regulars and came for their daily breakfast. 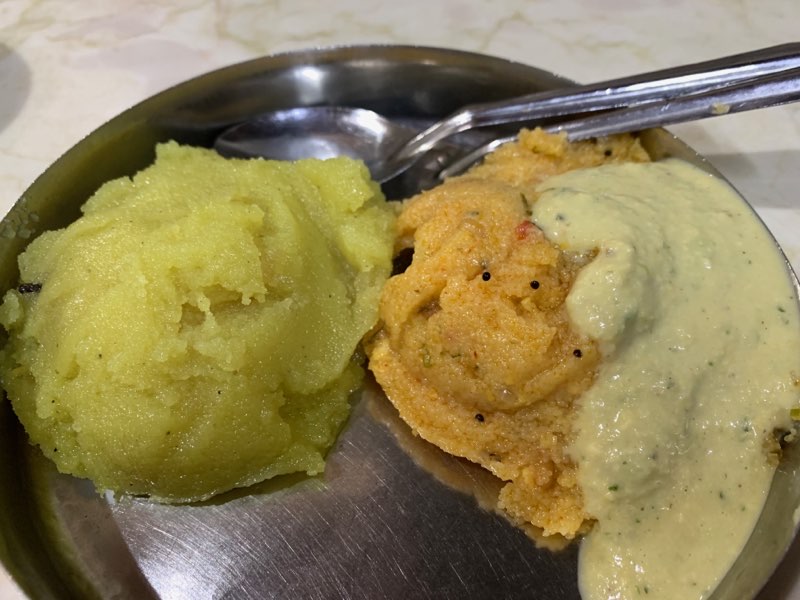 Chow Chow Bath (a strange name though) is a combo of Spicy Veggy Samolina Dish called Khara Bath and Kesari Bath, a mildly sweet Suji Halwa. Basically both dishes are Halwa with one being sweet and the other one spicy. These two mounds are served with Coconut Chutney.  One takes turns to alter between the two dishes while eating. A great symphony of flavours.

Suddenly, you see a waiter balancing almost 10-12 plates of Dosa along the length of his arm. Before you realise, he would quickly distribute it to the guests. In quick succession, another waiter would come with a pan full of Coconut Chutney. With a slight tilt of the pan over your plate, a good amount of Chutney is poured on the side. 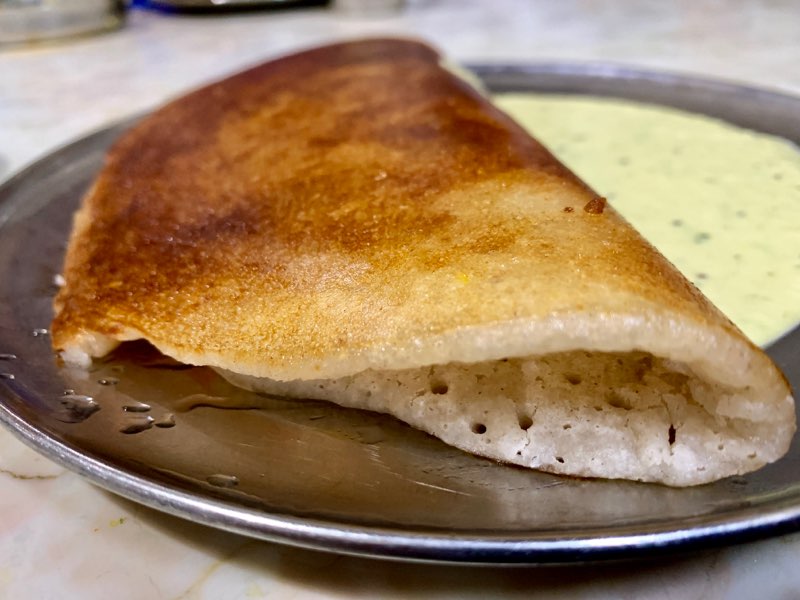 The Dosa is quite close to the CTR Benne Masala Dosa (you can read about it here). The outer crust was crisp with soft thick inner wall, done in Ghee. The filling was of mashed potatoes tempered with mild spices. Once again a marvel in itself. 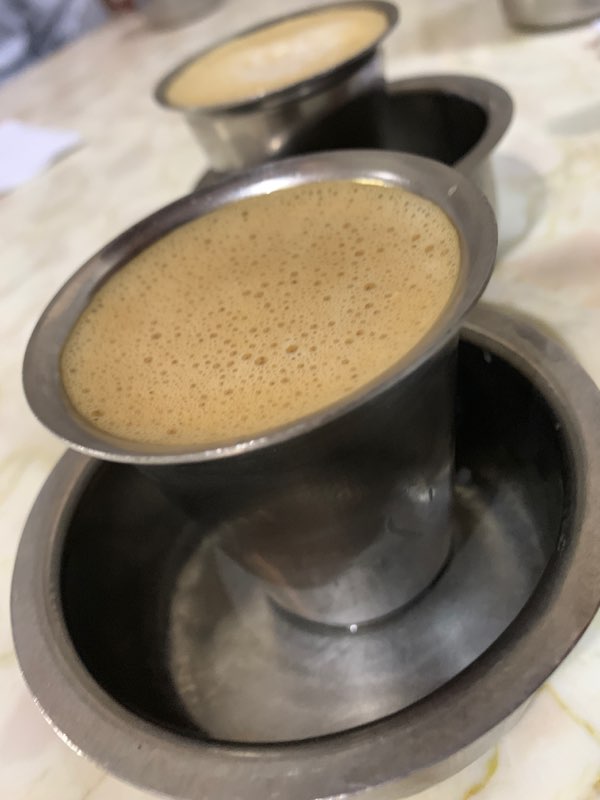 The satisfying meal was wrapped up with Filter Coffee. Frankly, that was the best Filter Coffee I would have ever had. Perfectly brewed, hit the right spot of aroma and the flavour. Aptly sweet and a perfect body.

This Andhra Style eatery is famous for its Thali Meals. We landed around 1 and there was a swarm of guests already in the waiting. It took us about 20 minutes before we were allotted a table. Again the ritual of Banana Leaves, water to be sprinkled for cleaning and no spoons. 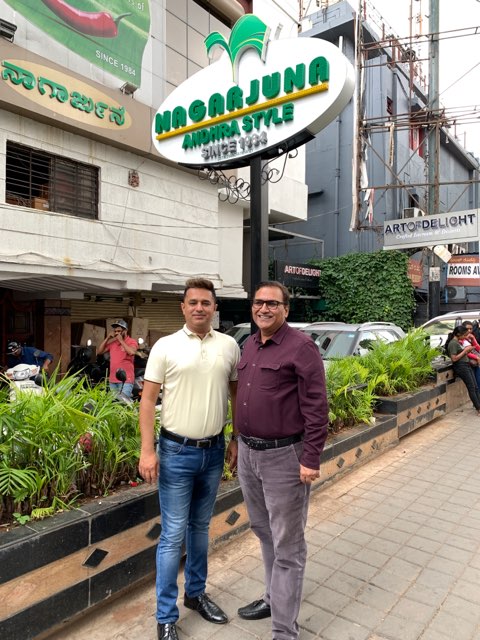 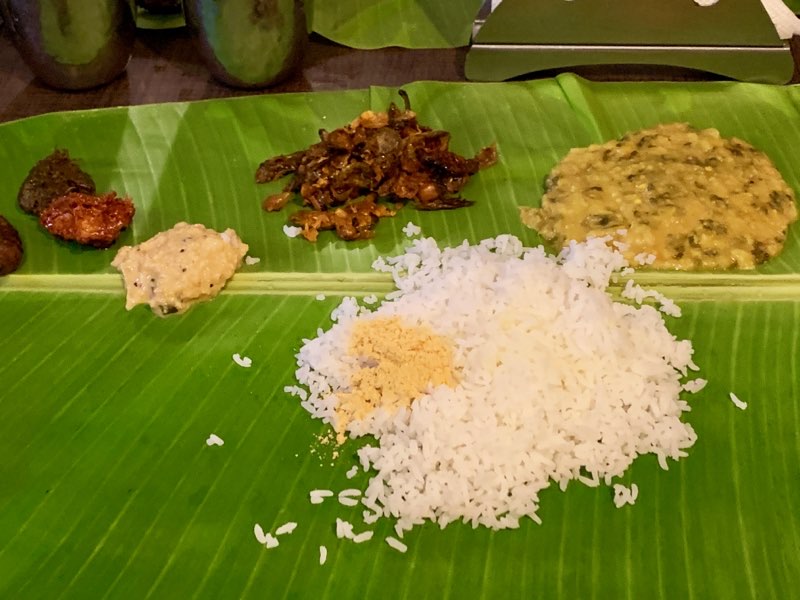 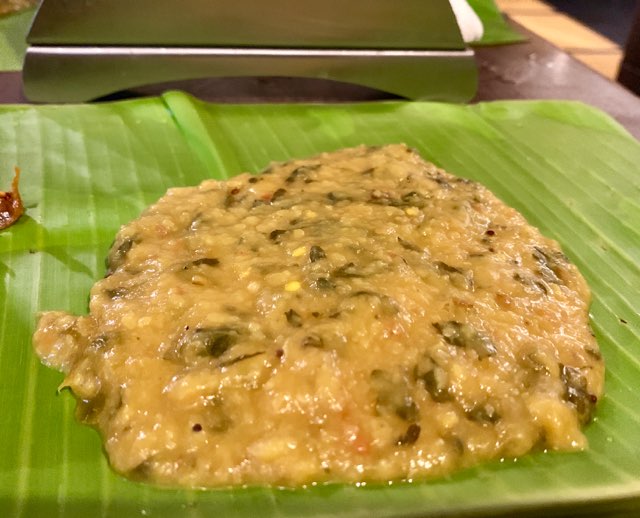 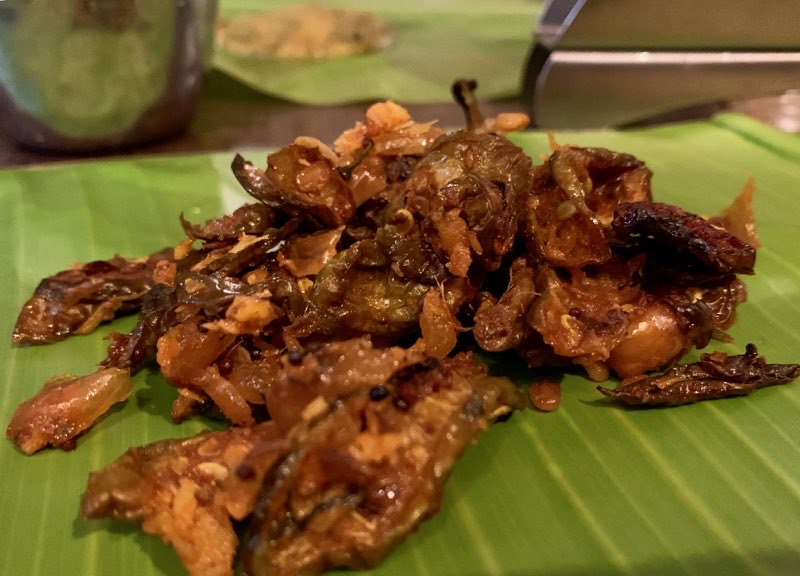 I started with Kundru and Dal with Rice and was so engrossed in its flavours that I forgot to take pictures of quite a few dishes served to me later. By the time I realised, my hands were all embroiled with the curries that I let go the idea of taking my cellphone out for the clicks. The Dal, the Subzi, the Chutney were so very flavourful that, once again, no words could describe. One has to experience it.

3 comments on “Best Biryani In Chennai; And Dosa, Meals In Bangalore”