I had a whirlwind tour of South of Delhi and tasted food at three South Indian Food joints. All three of them serving some great stuff. In this short Food Story today, let me introduce some amazing Sambar Vada, Dahi Vada, Masala Dosa and Porota Kurma that these places are offering.

Giving a miss to the likes of Sarvana Bhavans, Andhra Bhavans, Sagar Ratnas, Naivedyams and others (in no way I am saying they aren’t good), I tasted some amazing stuff at these three joints in South Delhi. Though, I tasted selected items only, based on recommendations from my friends. But I am sure, the other items served by them are equally good. The purpose of this short story is to introduce you to these outlets.

On a perpendicularly opposite road to the Mehar Chand Khanna Market, you would see a huge crowd around a pavement. This is the place. You could see people enjoying their grub all through the day. I tried Vada with Coconut Chutney. This golden fried fluffy 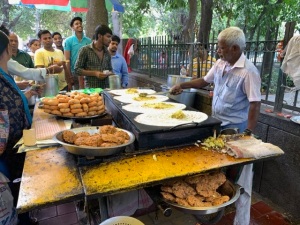 ring had virtually no oil visible. Gave an aroma of crispy fresh fritter. One can’t wait. The first bite and it was crispy and crunchy outside with a flavourful soft inside. I could eat it on its own without any condiment. The Chutney is nutty, granular and tasty. Both the Vada and the Chutney complimented each other perfectly. I had earlier tried their        Dal Vada and Idli. These again were quite flavourful. When around that side of the town, it’s a must try. 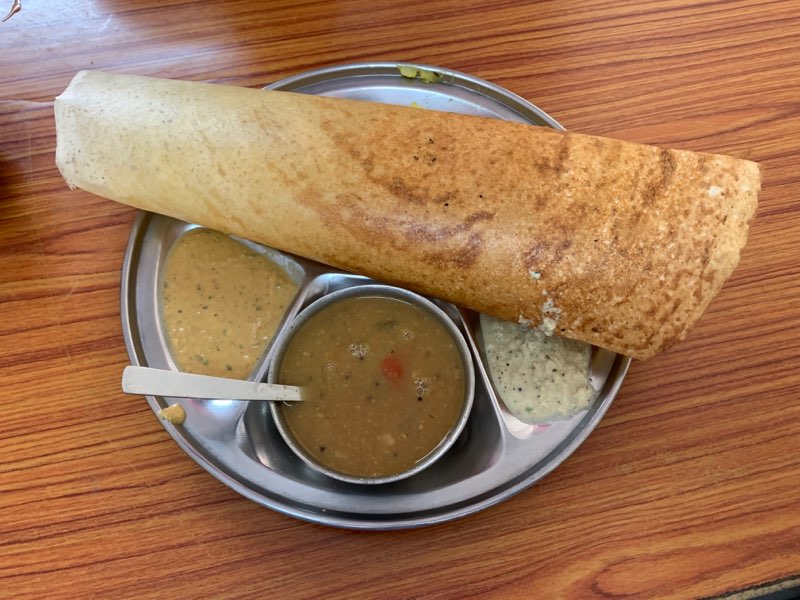 You could dismiss this as one of those local south Indian joints which are located in each colony. But then you would miss a great South Indian treat. Nested in this local shopping area, you can’t miss it. It’s right there at the entrance. We ordered a Masala Dosa ( told him to give the Aloo Masala filling separately and not in the Dosa. The Dosa came along with a bowl full of pale looking Sambar and two Chutneys, Tomato version and the Coconut version. The Dosa was golden brown with a glaze. Touch it and it was crisp.

Tasted the Aloo Masala; mashed potatoes done in basic spices with a mild aftertaste of fennel seeds. The two Chutneys were distinct in taste. You can’t decide which one is better. The ordinary looking Sambar was the best I have tasted anywhere. Full of flavours which burst on your palate the moment you taste it and has lots of veggies. You can eat that flavourful Dosa with its Masala, Chutneys or the Sambar and you can’t decide which combination is the best.

I can go to this place many times over for its so good.

Our next and final stop for the day was this conspicuous road side stall which was almost mobbed by huge crowds at around lunch time. Our order here was Porota Kurma and Dahi Vada.

Our Combo comprised three multilayered, fair looking, flaky Porota (parantha), a lavish serving of Veg Kurma and Coconut Chutney. Tearing off the first morsel of the Porota told me it was fresh, soft, moist and flaky. It was a delight on the palate. Kurma was a nutty, flavourful and textures veggie curry. The thick gravy was full of veggies. The Coconut Chutney was again nutty and sharp in flavours. This deadly combo of Porota and Kurma was a complete meal in itself.

The Dahi Vada was a typical South Indian version. The bowl had one Vada sitting amidst a pool of Dahi tempered with Mustard Seeds and garnished with Curry Leaves and Dried Red Chilly. The Dahi was sharp and tangy which had large slices of green chilly. The Vada was soft and moist.

I am sure, this place offers many other goodies. I am going there at least couple of times more.

It’s not so that this story today is giving a verdict that they are the best joints. Yes, there could be many in Delhi/ NCR or even in South Delhi itself. But surely, these three are serving a good authentic stuff. If you have any favourites, do let me know. Will love to try those and add on to this list. Till then….