A few days ago, in a gap of just 24 hours I tasted two versions of Mutton.  The recipe of one is complex as it uses almost 30 spices to prepare and the other one is basic with the usage of minimal spices.  The recipe of one is a secret and is  known to a closed family group (though attempt has been made to reach quite close and we shall discuss this later) and yet the other one is public (yet not very popular). Both are almost Street Food types and yet both are heavenly flavourful.  One is our very own Delhi’s legendary offering and the other one is from Peshawar. Let’s try to recreate the magic here for you.

Ashok and Ashok Meat Dhaba in Sadar Bazar, Delhi, an iconic eatery started by two locals who were friends and had same name, Ashok.  This place has been serving a special Meat Korma which is prepared in Desi Ghee, has Keema in its curry, is available only on Wednesdays and Saturdays only against prior booking.  It is prepared somewhere else and is said to use 30 different spices which are secret.  It is then brought to the shop around 1’O Clock and vanishes soon. It is heated on a small coal fired Sigree before serving to the guests and unlimited small sized Tandoori Rotis come free with it.  Scottish Jounalist Pamela Timms in her book, Korma Kheer & Kismet, has described the experience of enjoying this delicacy and her efforts to trace the recipe which she could trace to a nearly accurate recipe, quite close to the original one.

Recently,  I came to know that Ashok & Ashok have opened an outlet at Paschim Vihar, West Delhi. The place is quite close to where I live.  So, a visit to the place had to be customary. This hole in the wall outlet, is a bit difficult to locate in Sunder Vihar DDA Market. One has to go inside and would hit a place similar to this name but that’s not the one. Bang opposite is this smalll eatery, a typical Dhaba looking place which has not bothered to care about the looks. One could spot those coal fired small sigrees and servers heating plates of that dark brown oily curry over it.

We parked ourselves around a standing table whose top kept on threatening to fall off. Soon, we received our share on the table.  A plate having two pieces of succulent Mutton sitting pretty in a Keema gravy which has ghee floating on it, gives a whiff of aroma as it lands on your table.  It’s piping hot.  A small sized tandoori Roti comes free and one can have as many as needed. Surely, Roti is a second priority. First is the curry. So, quickly a spoonful of that Keema gravy, whose ghee had separated by now, in the mouth told you that it was a piping hot, had a bouquet of flavours.   No one spice or ingredient was over powering. All ingredients were blended seemlessly and it was not high on chilli quotient.   The meat was succulent, juicy and flavourful. The

gravy full of keema was aromatic and tasty beyond imagination. One can decipher the flavours of meat, keema, ghee and a few spices. Still, something is there which you can’t detect and would leave you asking for more. The small sized Roti is crisp and fresh coriander is infused. In the dough itself. It gives a further lift to the dish when you have it together.  For once, if you love Mutton Curry, ignore calorie consciousness, ignore the surroundings (both here and at Sadar Bazar outlet) but do taste this legendary dish.  One would ask more of it.

Those interested  in trying their hands on the recipe,  may refer the book of Pamela Timms where at the end of the very first chapter she has reproduced a nearly accurate recipe.

This Paschim Vihar outlet is run by Sunny Bhatia, son of the legendary Ashok Bhatia, the one on the left, in the picture of both Ashoka, displayed in the outlet. The same picture is displayed in the original outlet which is now managed by his mother and sister in law. Sunny told me that the consistency in the taste and flavours is maintained in both the outlets because he picked up the recipe from his father and that he prepares the Curry everyday which is then supplied to both the outlets. He denies having any relationship with any other outlet in Delhi, except these two which are “the original”. He says, any other is a fake and that he is in legal battle with those.

Namak Mandi is a place in Peshawar and the locals there prepare a Kadhai Meat which is a hit with the locals and the tourists equally. This Gosht is similarly made in animal fat or alternatively in Ghee. But this one has just Salt and has no gravy. And is amazingly flavourful. Here the aroma and taste of ghee or fat and the meat leads the dish. I studied about the history of this gosht.  Incedentaly, legendary Chef Imtiaz Qureshi opened an outlet in DLF Emporio in Delhi and named it Namak Mandi.

I have had this discussion about this Namak Mandi Gosht with Chef Sanjay Pawar a few days ago.  And as the luck would have it, the very next day, after I had enjoyed that Mutton Korma from Ashok & Ashok, Sanjay brought a casserole full of Namak Mandi Kadhai Gosht for lunch which, he said, he prepared that morning.  It was like our day was made.  Between three of us, we polished off the entire stuff. 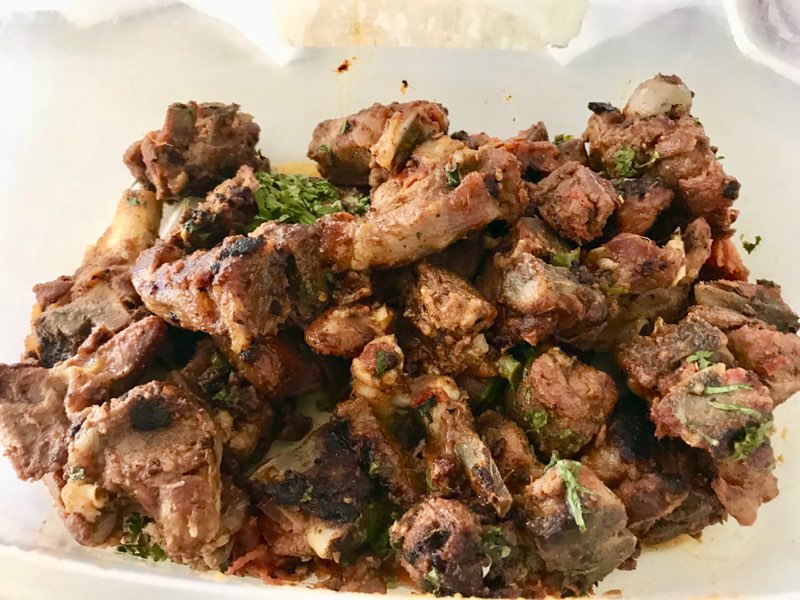 Sitting in a microwaveable box, there were masala coated pieces of Mutton, dark brown in colour and charred at the surface at quite a few places. Sanjay told that the original recipe warrants a bit of charring the meat while frying to enhance the flavour of the meat. This Kadhai Mutton resembled the Mutton Burra but it is a dish fried in a kadhai. The aroma of meat coupled with ghee was like something to die for. One couldn’t wait further. Picking one piece I shredded the meat from the bone. It 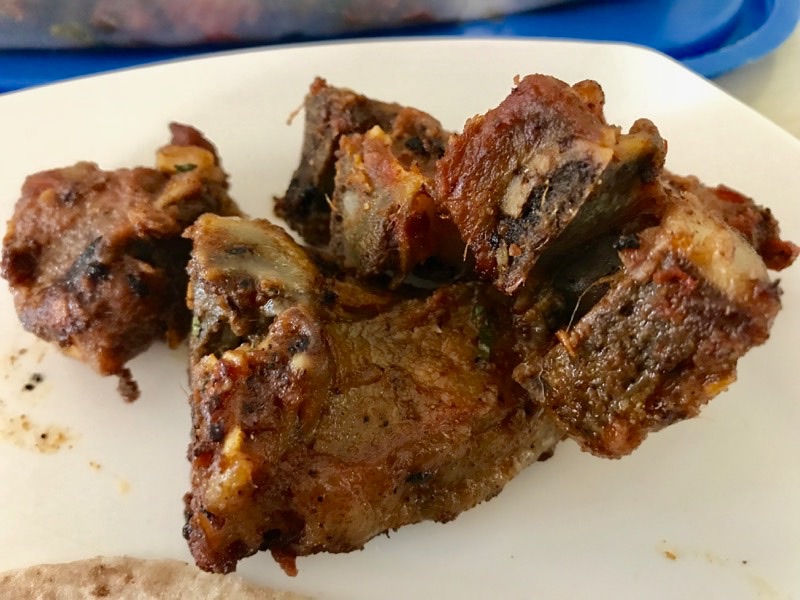 came out albeit with a bit of an effort. One morsel in the mouth and it was a salty meat, succulent and moist with an aroma of ghee. The charred portions gave that rustic touch to the texture and the flavour. One large piece vanished in no time and then the next and the next. What an amazing dish.  It is not spicy, no gravy and. yet moist with ghee.  It has no complex flavours yet very delicious. It is succculent, simple yet very flavourful. I had it on its own and then with a chapati too.

You may google and can find a few versions of the recipe for this Namak Mandi Kadhai Gosht. Chef Sanjay Pawar’s recipe is slightly different. He shared that in the original recipe it’s only salt, where as he also uses a bit of Garam Masala, Dhania Powder and  Jeera Powder, all put together, less than half a teaspoon, to balance the smell of the fat.

So, two mutton dishes, one has 30 secret spices and a lot of ghee and keema gravy. The other one has no gravy, has just salt and lots of ghee. Both are a delight to savour and leave you asking for more and more….