Sometimes Food Stories unfold like a film plot and that is exactly what happened with me last week in Jaipur. To avail the long weekend, we were on a short vacation to this royal city.  We were out, sort of trying to enjoy the grandeur of Jaipur and the temperature was scorching 38 degrees.  By the late noon we wanted a cool place to sit down and have a satisfying lunch.  The cab driver Vinod (who was with us since last two days) suggested that we go to Niros on MI Road.  Both Niros and MI Road struck a chime in the mind.  We agreed and soon were on our way….not knowing that a flashback awaits.

The moment he dropped us in front of Niros, I said to myself, hey wait, as if I know this area (Niros is famous and legendary and of course with my interest in food, I had  heard about it, never visited though). Then how do I know this area ?

Even at around 230 on a Saturday, there was waiting at this place.  Having registered my name with the person at the entrance, I decided to explore the surroundings, to understand why does the place sounds familiar.  Next to Niros, there is a lane and just next to the lane there is a restaurant Surya……oh oh, suddenly I remembered that I had an amazing Chholey Bhaturey for Breakfast here in this place, around 20 years ago!! I still remember those huge sized round Bhaturas and those tangy Chholey.  I still remembered that I was pretty much floored by the quality and the quantity of those.  I still remember the interior had a big sun on a glass window, don’t know if it is still there.

From the reminisce of that hearty and tasty breakfast, thoughts  flashed that during that trip I was living right behind Surya. And yes, I could spot Hotel Imperial, the imposing building just behind. During those days, you were junior and entitlements were less, so Imperial was the one.  May be it would have been a three star or so but was not bad.  So, in the mornings, it used to be a quick walk to Surya for breakfast. Wait, the filmy flashback is still not over.  Like Imperial, while standing at Surya, I was also reminded of a Lassiwala bang across the road. I turned back and across the road I spotted that familiar shop !! The conspicuous signboard saying “Lassiwala, since 1944”.  Isn’t it a filmy story?

All this flashback happened in just few minutes while my family waited for them to be seated for the lunch.  I narrated the flashback sequence to them and by the time I finished my account, were were asked to be ushered in as the table for four of us was ready.  Suddenly, my urge to enjoy that Lassi arose.  Asking the children to go inside and decide the menu, me and wife, braving the scorching heat and the speeding traffic, hopped across the road to that famous Lassiwala. 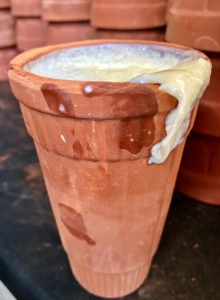 Ordered two small glasses (didn’t want to kill our appetite for lunch).  In couple of minutes we were handed over two earthen glasses (glass shaped Kullhars).  A white milky lassi was topped up with Malai which had a saffron tinge to it.  One sip and both of us were unstoppable.  The Malai on the top was thick, creamy and flavourful.  The consistency of lassi was just right, not very thick not watery. It was cold yet not chilled (had no ice cubes).  It was sweet yet not very sweet.  While sipping, the flavour of fresh curd blended with the earthen glass which gave you a refreshing taste. In fact, it was a perfect prologue to the lunch. The lassi that I had almost 20 years ago here tasted the same even today. Both of us were feeling great and repented that we couldn’t have  the larger glass.  Anyways, there is always a next time.

Back with our children at Niros, the order was more or less got firmed up in our absence.  The narration of Lassi experience encouraged the children though but had to be left for some other time. In the meanwhile we ordered Malai Kofta (wife’s favorite), Butter Chicken (all time Punjabi favorite), some Tandoori Rotis and Butter Naan (children’s favorite).  The order sounds very normal though but we were in for surprise.

The restaurant is an iconic place for the city.  Is a fine dinning, slightly upmarket with basic, monotone interiors with lot of mirrors around, including the roof.  The place is quite poopular with locals as it was almost full even around 3 in the afternoon.  The place would remind you of some of the old time similar restaurants in Delhi’s Connaught Place.

After a while of wait, the food arrived.  It was sitting in various vessels and looked quite picturesque.  The Malai Kofta gravy was pale yellow in color and had a somewhat granular texture.  The gravy was hiding in it two good sized koftas  and was topped up with a whirl of fresh cream.  Overall a great looking dish.  The Butter Chicken was red in color with same granular kind of texture and had four pieces of chicken in it.  The Tandoori Rotis were crisp and gave fresh aroma. The Butter Naan was a delight to look at.  It was goldenish white with a sprinkling of black Kalaunji .

To start with, the taste of Malai Kofta didn’t come up to our expectations. The gravy predominantly  smelled and tasted of onions.  It looked as if the onion garlic masala was not fully cooked.  The Kofta, though was of reasonable size, was soft yet lacked flavour.  The filling inside was dry and with very basic seasonings.  That overall richness, creamy texture, that flavour of khoya-paneer blend and dry fruits were missing. We found it to be quite ordinary.  The start turned out to be a damp squib so had  no great expectations from the Butter Chicken as the texture of both the dishes appeared to be the same.  One spoonful in the mouth and it was a pleasant

surprise. The gravy was rich, smooth, and tangy.  The meat was roasted, gave out earthen flavours of tandoor, was soft, juicy and succulent.  It was not laden with usual tomato ketchup or sugar or cream.  It was a combination of right mix of spices, tomatoes, meat (the pieces were big as of country chicken).  In fact, the taste reminds you of what you get in iconic eateries in Pandara Road, Delhi.  It went quite well with  crispy Tandoori Roti and with Butter Naan. In fact,   what we lost in Malai Kofta, was more than made up by the great  Butter Chicken.

The meal was wrapped up with a round of Brownie with Vanilla Ice Cream & Chocolate Sauce.  The Brownie was fresh with blend of flavours of rich cocoa and nuts.  The Vanilla was creamy rich and was topped up with a thick chocolate sauce. 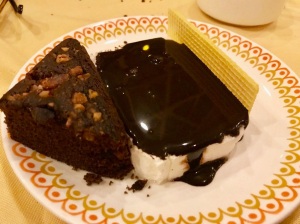 It was a delight to enjoy it with a thin wafer which accompanied the dessert.  Overall a satisfying  lunch, except the Malai Kofta, at an iconic place.

Jaipur has quite a few iconic places to eat.  One of my favorites is Handi Restaurant, again on MI Road, where I like Junglee Maas and Lal Maas.  I had written about this in my earlier blog post and you can find its link here.

Both the Lassiwala and Niros (and ofcourse the dramatic reminisces) left us asking:  Yeh Dil Mange More !!

3 comments on “Flavours of Simplicity And Finesse”

I was at this #Microbrewery in #Chandigarh, about a fortnight ago. Today, was just surfing their page on FB. Found this on their page 😊 @brewestate
In a stay of less than a day in Chandigarh, I had Beer, Lassi, Missa Parantha, Anda Parantha, Tangri Kebab, Mutton Rara, Dal Makhani, GolGappe, Tikki, Chat and what not. Even a dinner with a Celeb !! You want to know where? Read the story in the link :
I would have had a Cream Roll after decades. Was very fond of it in school days. A couple of weeks ago; picked it up from Mohan Bakery, Ambala and am glad I did. An amazingly flaky crust wrapped in it a rich quality cream and aptly sweetened. A dash of Chocolate completed the experience. One of the best 👍
If you have a sweet tooth like me, then when in Jalandhar, do not miss this amazing Jalebi, Kulfi Falooda and the Plum Cakes. You could thank me later.
#WeekendCooking in #MyKitchen:
There’s light at the end of the tunnel...and there’s me too there 😊